It started out so beautifully, so innocently. Since it was such a gorgeous day out, Olaf suggested we go for a hike. We got in the car and then drove to a little town called Güster, where we were to begin our walk. Olaf had researched some hikes and had decided on this one he had not tried before. We were about 10 minutes into our walk when Olaf made what I thought was a joke about the 10 miles ahead of us. Ha ha, I thought, whatever Mr. German Drillsergeant. Olaf had prepared some sandwiches that we would eat at some point along the way, and about an hour and a half later I was feeling a little hungry and asked if he wanted to stop. “Not until we reach the lake.”, he said. And when I asked how far the lake was, he showed me a map of our trail and I noticed that it seemed like we were only about halfway to the lake which was about the halfway point. I thought perhaps the map wasn’t to scale, so I fired up Google Maps and realized to my horror that he had not been kidding about the 10 miles. By the time we reached the lake, the bottoms of my feet were already starting to hurt (note to self: don’t hike this far without proper shoes). We stopped for about 20 minutes to eat, then began the second arduous 3 hours to complete our circuit back to the car. It started to rain on and off. For the last hour I could barely walk and by the time we reached the car I was weakly hobbling and muttering references to the death march at Auschwitz that Olaf’s forebears had subjected mine to. In total, the walk was over 18km (which sounds even worse than 11.2 miles), and I am glad to have made it, but informed Olaf that I would be having a say in the next walk.

Yesterday was all about walking the lovely streets of Paris and catching up with friends and enjoying the beautiful weather. Check out some of the pics below.

Olaf and I took a stroll today to see the (somewhat) nearby Dolmabahçe Palace. It was constructed rather late in the Ottoman Empire, and it is a gaudy mess of a building. The style borrows heavily from European aesthetic traditions of the time, which is fascinating for what it reveals of this dying empire looking West instead of locally or even to the East, or its much more glorious (and aesthetically consistent and pleasing) past. If you are in Istanbul with limited time, definitely give this tacky horror a miss. It probably didn’t help that it was rather hot out today, and we waited in long lines to be taken through the place, dripping sweat as we went. After our 2.5 hours at Ottoman Disneyland, we headed up the coast towards Ortaköy. I was told the walk there from Beşiktaş was really lovely, and it wasn’t awful, but it wasn’t quite the charming seaside stroll we had imagined. And Ortakoy itself was cute, but a bit overpriced.  I got the impression it was the kind of area that wealthy Turks (rather than poor Turks or foreign tourists) would frequent. Still, one of the great things about spending this much time in a place is that I can get to know some of the places that regular, rushed, tourists can’t, and I kind of appreciated walking through these parts of the city.

Yesterday was one of those days that makes me love New York — and makes everyone else think that I should probably be locked up for the inane grin on my face and kind, open look in my eyes. There was no special event happening. In fact the day was about as mundane as could be, but no matter where I was it was a pleasure. Went to go meet my friend Jon for lunch and he noticed and commented on this cheeriness in his usual way (with vague threats of physical violence). After lunch I took a pleasant, slow stroll through the streets near the UN to my apartment listening to music and feeling a strange and sweet sense of connectedness to every pedestrian who crossed my path and to the buildings and streets. The weather was perfect, and I am sure that helps. And being freelance and feeling no particular time pressure helps as well. In the evening I walked across town for a website meeting at a new (fucking) hipster hotel and then had a lovely dinner at a (so called) Indian restaurant called Tabla. The food was really more Indian inspired than Indian, but delicious nonetheless.There was seating outside, right across from Madison Square Park, the weather was perfect, and this continued my good-feelings-toward-New-York mood.

Other stuff happened during the day, but not as worth mentioning here. I leave that to your imagination…

All over the US, many crosswalks will have a button on them. The purpose of this button is to alert the system that you wish to cross. I have long wondered whether these do in fact link to any system, or are merely there to make the control-happy residents of this country feel as if they have some measure of power over something when in fact they have none. Perhaps it is just the equivalent of the “barber pole” progress bar prevalent in so much software. The bar doesn’t do anything other than alert you that a process is happening (and often times is totally faked), but it does give the illusion that progress is being made and thus calms the user. Similarly, perhaps the button is false comfort, but comfort nonetheless since it supplies the illusion of input or control. What do you think? Does the button actually do anything? 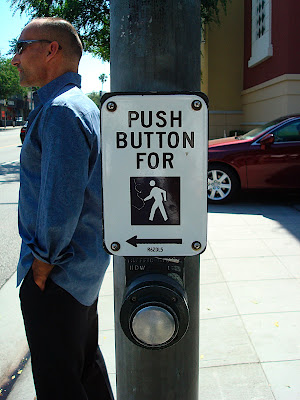 Time was I could move very swiftly through a crowd on the streets of Manhattan. Like a hot knife through butter, the crowd and I seemed to sense each other and slide out of the way so easily. But things have changed, and there are so many near misses and outright bumps that it is disconcerting. I chalk it up to a few possibilities, but the one that seems most likely is that I have spent too much time in other cultures in the intervening years, most especially places like the UK and India where people drive on the left side of the road and likewise walk to the left as opposed to the right. So I try to move right here as much as I can, but it isn’t working as well as it should. The other possibility is that perhaps the populace of NYC has also changed in the past few years, and they no longer know how to move when people are approaching them. Perhaps we all get a different “read” on each other than 10 or 20 years ago. Who knows, but it is a little annoying.