Since I have spent a fair amount of time on the subway recently, and I have a little time to kill waiting to get to my destination, I start to wonder about some of the choices the system designers made. For example, many of the cars have individually delineated seats (as opposed to smooth bench style). Now the thing about these seats that strikes me as a little odd is that they are just too small for a good deal (perhaps 30 percent) of the passengers, and so many of them end up straddling more than one (with the plastic bump riding up their ass) or at least spreading their legs good and wide enough to not allow anyone next to them. Most of these seats are in cars that I think were designed at least 30 years ago, so it begs the question(s): Have people generally gotten bigger over the past 30 years, or have they become more rude, or both? And I am not just talking obesity here, although there is certainly a fair amount of that. Many people who are not fat are nevertheless too wide to fit. Even I find that I need to be sitting next to someone rather petite for my shoulders not to push them and vice versa. And although people start out rather rudely trying to hog as much space as they can, they will move in almost all cases to accommodate another, even if it means leaning forward or back for the entire ride. I surmise that there has been a gradual and imperceptible shift in body size over the intervening years since the design, and no one has thought to re-evaluate and replace these cars. Or it could be just a budgetary problem, as they must be expensive to replace. I do notice on many of the lines with newer cars that the seats tend to be long smooth benches, which allow as many as can fit, each in the space they need. 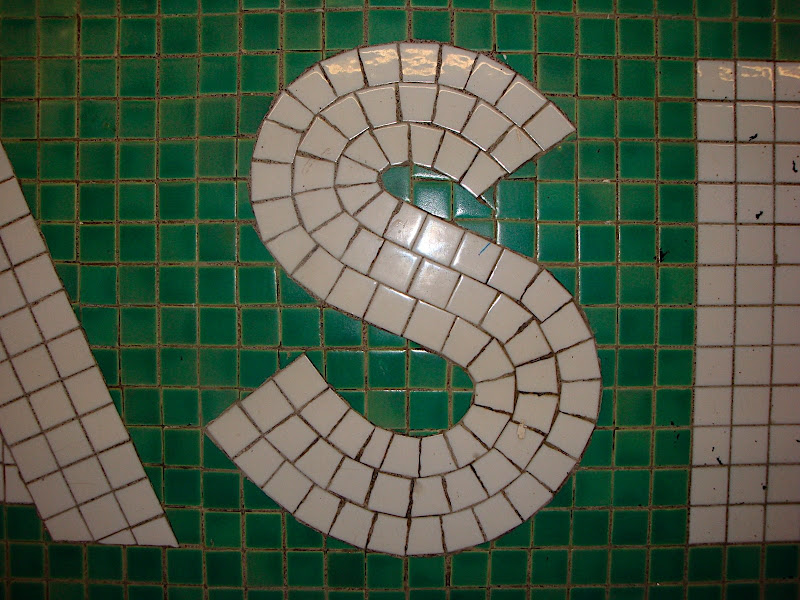 Over the past several days, I have been getting reacquainted with the New York public transportation system, known as the MTA. I have been amazed at its speed and efficiency and ease of use. I have been continually impressed with the fact that it only takes a few minutes to get to rather far-flung places in the city, that the stations and cars seem clean, arrive often and are not overly crowded. Using their card system is incredibly efficient, whether or not you go with an unlimited or pay per ride card. And their trip planner is the best I’ve seen with the possible exception of London’s.

My friend Gabe was complaining the other day about the look of the metro stations, but I actually kind of dig the aesthetics. There is something utilitarian about them without them being artless. The brick and tile work in many of the stations is really sweet without being cute. The subway system isn’t trying to hide the fact that these are tunnels operating underground, the bowels of the city at work.