I was walking around San Francisco this morning when I came across a pair of jeans left bunched up on top of a public trash receptacle. Not stuffed inside, but sitting on top of it. Not given to Salvation Army or recycled or thrown out with all the other trash that one throws away from behind the veil of secrecy at one’s own home, but here on display in public, and left in a manner that suggested some hurry and desire to be rid of them in a flash. What is the story behind these pants? Did they have a rip and someone did a quick change on the street into a new pair and left these crumpled in place? Did someone have a sudden urge to galavant naked around the (very cold, I might add) streets of San Francisco this morning? Had someone been carrying around this extra set of pants with them for some time, hoping against hope to find just the right tailor to repair them and finally gave up the ghost after one last heartbreaking head-shake from a local seamstress? Perhaps they had refused to BeDazzle them with some lewd image? Maybe someone had been carrying around their partner’s pants and just at that moment learned of some infidelity and tossed them and the relationship aside in a huff? Maybe someone was carrying a huge pile of clothes down the street, so big that they couldn’t see in front of them, and this lonely pair slid off at just this place? What stories could this pair of jeans tell if it could talk? 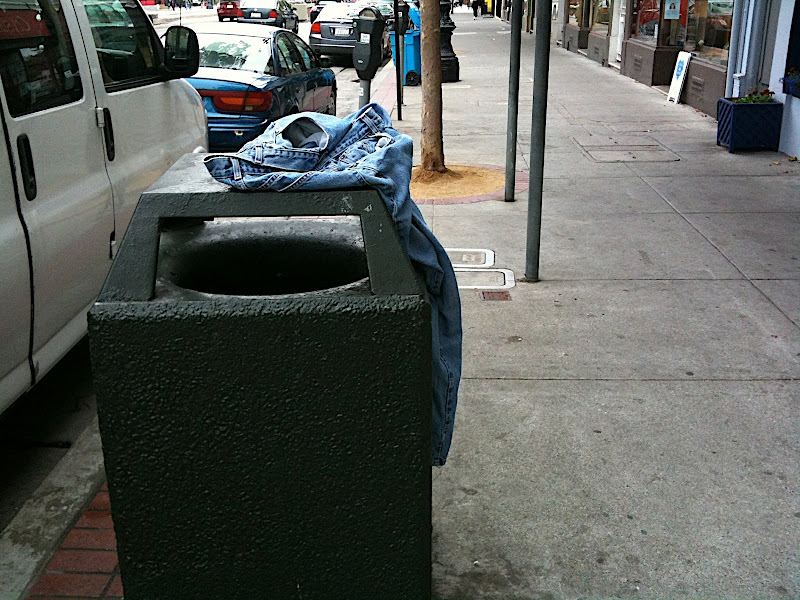