I can’t keep silent anymore. It is time to blow the lid off this scam. Ever since moving to New York, I have noticed the multi-year presence of scaffolding around various buildings of all sorts, all over the city. It goes up one day and comes down about 1-2 years later, revealing…mostly nothing. For the life of me, in at least 50% of cases, I can not see ANY difference in the building after they remove the scaffolding. No new windows, no paint job, no facade repair, nothing. This has been bugging me for quite some time, and I have developed a theory as to why this is so.

There is clearly a kind of “protection” racket being run by some sort of Scaffold Mafia. They go around from building to building and threaten to rough up people or places that refuse to comply with their scaffolding “contracts”. Imagine a gruff, hairy-knuckle type saying the following words to a building owner with a thick New York accent:

And then for good measure he might open his overcoat to reveal that he is packing heat. Or make a kind of cutting gesture across his throat. Then the building owner, by now quite pliable for fear of being fitted for concrete shoes and dumped in The Hudson, acquiesces to a multi-year contract to put up scaffolding around his building, even though he has no plans for improvement, and nothing will in fact be done.

Today was one of those totally great days that make you fall in love with the magic of New York all over again. One of those days that makes you realize how truly endless are the things to discover here. Today’s love ode to the city is mostly thanks to my wonderful friend Jonathan, who seems to have a deep knowledge of a huge number of quirky and great places in the city. We met down in the Lower East Side where he was doing some work at a coffee shop, and proceeded to have an inexpensive yet super delicious lunch at a Venezuelan restaurant called Caracas. We left to walk for a bit in search of dessert and made a quick detour into the St Mark’s Bookshop, which I remember well from 20 years ago and thought disappeared when their actual shop on St Mark’s street had closed several years back. To my delight, that seductive book smell still permeated the place, and I got an intellectual charge from our brief browse. After that, we headed to Sundaes and Cones for a really yum sesame ice cream, followed by a simple walk in perfect weather heading west on 10th street (which is home to some really beautiful architecture). I said goodbye to Jonathan while crossing 5th avenue, and made my way home.

In a way, there was nothing special about our little lunch and walk. These small adventures happen all the time (if we are open to them). But in another way, this kind of day, filled with minor new discoveries, deepens my optimism about life in New York (and in general) and the endless possibilities presented by so many different kinds of people living in such close proximity to each other. Although there are amazing, cosmopolitan, capitals to be found around the globe, for me, New York is the capital city of the world.

Scheduling to do work on the subway system must be quite a logistics nightmare. I get it, I really do. But is it really necessary to have almost every single line in the system under some kind of closure or detour AT THE SAME TIME? One of the advantages of a vast system is that if one line is closed there are always others than should be running normally. Of course the problems multiply the farther you have to go with this kind of massive upheaval. It was a bit of a mess getting to and from upper Manhattan tonight. Are there improvements being made to these tracks or lines? Repairs? Staffing problems at these segments? A master sadist behind it all making ice cold commuters jump through hoops for his (or her) sick amusement? I haven’t lived in NYC in many years, but I don’t remember ever having such a large number of train route service advisories in all the time I lived here or during my many visits. Is it my imagination or is this excessive? Is this (gasp) normal?

You forget how much the weather is a part of our lives. I took a walk in a beautiful snow covered Prospect Park this morning and was inspired. And it has been snowing all day, that wet, large-flake kind that has something magic about it. It is impossible for me not to smile in this snow. Even though I grew up with it, it has been years since it was a part of any climate I have made a home in. I wonder how each season affects our moods and outlooks, and how climate affects our sense of the possible in our lives. I know winter can be a sad time for many people (and I’ll admit the bitter cold windy days are less fun), but there is something wonderous and beautiful about the snow.

Today I went down to meet my cousin (who lives here), and my Aunt and Uncle (who are in town visiting) for a visit to the Lower East Side Tenement Museum. There are several tours that one can take, each depicting a particular group of people, their tenement and tour description of what their lives were like.  Our particular tour was focused on Jewish families living there and working in the garment district, which in its heyday was enormous. The tour was not only educational, but implicitly political, dealing with subjects such as the history of worker safety and sweatshops, unionization, immigration, and family life in the US and on the Lower East Side in particular. Our tour guide, Max, was excellent, posing interesting questions about our definitions of sweatshop conditions and the like. It is interesting that there is no simple objective way to say for sure if someone is working (or living) in horrible conditions, as it depends significantly on our own current standards for health, worker safety and exploitation. I was struck by how much many of the circumstances in the tenements mirrored conditions I had seen in India. Some labor practices seem to exist side by side with a certain level of economic development. It was abundantly obvious looking at these places why unionization was at one time such an important lever for improving working conditions in our society. I highly recommend the museum if you should come to New York. I am sure I will return to take another tour.

At the moment, I am having a little difficulty determining what to do. I am staying in my friend Sivan’s home, and although she has been very gracious and welcoming, I feel like it is not my space.  Call me Virginia (if you must), but I feel I need a room of my own. I need a quiet space to be and work with few distractions. Nothing fancy or large, but simple and ordered. The awkwardness of living in someone else’s space is getting to me a little. That said, I feel that I should probably secure at least a modicum of work before committing to a lease or long term renting. It is a big advantage not to be paying rent right now and I am very grateful to my friends for offering me a bed in their homes. Perhaps I should just bite the bullet and get a little defensible space of my own. My job search and writing are both feeling a little scattered. It is funny that in (most) of the time of my traveling, I didn’t feel so much in need of this, as I always knew I would be moving on sooner or later, and never felt too attached to any place or space. Now having decided to make a go of it here in one place, for an open ended length of time, I feel a desire to have a small mooring. Nothing major, but something to tether to as I thrust myself into New York and its life, in the city I hope to call home.

Yesterday I met up with a nice group of guys at MOMA for a walk around the various exhibits. At the entrance I was confronted with the sobering fact of a twenty dollar entrance fee, and decided to become a member (which was only sixty dollars). Much like buying my MTA card, this struck me as a commitment by me to the city and by it to me. I love the MOMA and I am sure I will go many more times this year (he says by way of justification).

Had a lovely brunch at a place called Melt today in Park Slope with my friend Sian, where we discussed the hopelessness and horror of the situation in Gaza, among other things. Brooklyn (and Park Slope in particular, where I am staying in the lovely apartment of my friend Sivan at the moment) is a place to the east of Manhattan. People that live in Manhattan seem unaware of it, and are mystified when presented with the street grid here, although it is a grid and they all have iPhones and GPS. Such was the case with my cousin Josh this morning, who actually has a work gig in Brooklyn at BAM and struggled somewhat to undestand how to meet me but a few blocks away from where he was.

Today I actually did some networking, worked out at the gym, met a friend for coffee, and picked up my fixed laptop (yay) from the Apple Store on 14th (where I have to say they have about the best customer service of any place I have been). Then I took the subway home and admired the falling snow. What a Pollyanna. But I am feeling pretty positive about being here and finding work, even in this economy. My friend John tells me he isn’t worried about me, what with my relentless, oppressive positivity. He is sure I will be alright even as he tries to grind it out of me. And you know what? I believe him. Tomorrow I am moving in with my Sivan in Park Slope for a while. My hope is to find enough work to make me feel secure in renting an apartment before I run out of friends to crash with.

– John and I had a small reunion early in the evening with our friend Eric from the west coast. The three of us hadn’t been together in one place in over 10 years and it was great fun.

– Went to a pre-party set up with Eric, then with John and Kevin to a party in Brooklyn. One thing I notice here (if these two are any indication) is that the food at parties here is way better than LA.

– The people sitting in the MTA booths late at night apparently don’t know the schedules of the trains that are running through their stations.

– Speaking of the MTA, did you know that the subway in New York runs all night long? That is the mark of a real city, and I am thrilled.

– It started cold and got much colder (to about 14 degrees. brrr.)

Then again, it could be a bridge, depending on your perspective. 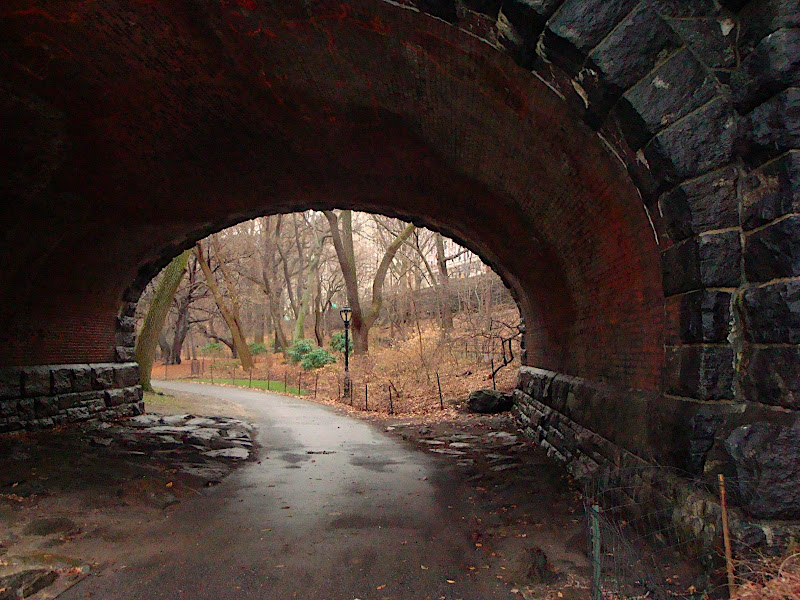