I am back in Marrakech for work once again, and so far not a ton is new to report. I did bring Mr. Toutmerde along for the ride, so I have a little bit of company. I am happy to note that my friend Bjorn is also in town, and we will be having dinner tomorrow night. The company I am working for put me up at the Bab Hotel, which was really run down and terrible the last time I stayed here, but they told me it was under new management so I agreed to give it a another try (not that I had a choice). I have to admit that several things are quite improved since the last time. The service and attentiveness of the staff is much better than before, and the breakfast is actually fresh this time around, instead of the stale mess they used to serve. The place is still in serious need of a maintenance budget, but overall things are ok and the design of the place quite good. As for the work itself, it is as I expected it would be (when you work in Morocco, you don’t hold your breath for things to go off without a hitch), but the people are nice as always and the weather has been 80 and sunny, which is a wonderful change from NYC.

Last night Anthea (the garden’s graphics consultant who is also in town and staying at the same hotel) and I decided to have dinner together, and asked the concierge for a recommendation close by. Without paying too much attention to the details, off we went to the hotel/restaurant nearby, a place called Dar Rhizlane. Upon arrival, my companion and I had the slightly horrible realization that this was probably going to be quite a bit beyond our means, everything was impeccable, opulent and just screamed call your bank to make sure you have enough to cover this. But since we were already there, and the place was so lovely, we just went with the flow. After ordering the wine, we were informed that there was only a tasting menu offered, and they would be bringing that out to us presently. What followed was the appetizers course, which looked like this:

Each and every dish was delicious. I have had many meals in Morocco where they serve a variety of little plates or salads as appetizers, but this was hands down the best I have ever had. This was followed by a small chicken/mushroom entree, and then a lamb entree, then a pre-dessert sorbet, and finally dessert. Or should I say plate of several desserts, each one quite tasty.

We waited for the bill and played the money guessing game, but by that point I really didn’t care what it cost. It was one of the best meals I have had in Morocco, and one of the most beautiful settings:

I really couldn’t have been more pleased. Or so I thought, until the bill arrived and it turned out to be less of an extravagance than I had feared. If you come to Marrakech, I would highly recommend having a meal at the Dar Rhizlane.

This morning Josh and I went to see a few things in the Medina I had not yet visited on my previous trips here. First we went to go see the Saadian Tombs, which were ok as far as they went, but one fact about them was just fascinating to me. They were sealed up for centuries, and only rediscovered in 1917 and subsequently restored. How does a large, above ground complex “disappear” and get “rediscovered”? Wouldn’t people have wondered what that building was behind there?

After that we went to the El Badi Palace, which must have been an impressive place in its day, and still is, even as a haunting ruin. Like seemingly everything else we have seen on this trip (Volubilis among others), much of its original marble and riches were plundered by Moulay Ismail for his own pleasure palaces. If you ask me, Moulay Ismail seems to have been a real asshole.

Following up our palace visit, we decided to take a walk in the nearby Mellah, which was the old Jewish ghetto here in the Medina. Many medina towns in Morocco have such ghettos, which were variously places to protect and imprison the Jewish population, depending on their usefulness to those in power at the time. Although at one time this area was quite prosperous, at the moment it is among the poorest and most run down in the Medina, and quite an eye opening experience. It was also interesting that the streets of the Mellah were all quite straight and parallel to each other compared to other parts of the Medina, and this made getting around quite easy.

Finally, we ended our excursion with a trip to the 19th century Bahia Palace, an incredibly beautiful and well crafted place with a level of detail that boggles the mind. We then had a quite delicious meal at the creatively named El Restaurant Bahia next door.

The project I have to do here in Marrakech is related (as so many things in Marrakech are) to French expatriates who came here many years ago. Many of them were (or are) in the fashion industry, and this place has a rich history that interweaves their stories with the stories of Morocco and the stories of the fashion world, its inspirations, history, and gossip. So several of the people around me are quite familiar with that world where I alas am not. And in conversation, they often drop names of people who are central to this history, and whom I suppose are quite famous, but whom I have never heard of. I try not to stare so blankly and make a mental note to look them up later, hoping I can figure out the spelling or last names when only the first are used. Still, I have to admit that one of the reasons I enjoy working with diverse clients is to learn something about their interests, their work, and their worlds. Today is my last day in Marrakech, for tomorrow I fly to Casablanca at 4am(!) and after a few hours layover, back to New York. This trip has been fantastic, but I am ready to be home.

I have to admit I didn’t expect to be back in Morocco this soon after my first trip 6 months ago. But this time I am here for work, so it is a bit more formal. The hotel they have put me up in is a western style boutique hotel, and it is nicely designed with a lot of nice touches, even as I am reminded of the chaos of certain places (there was a dog barking loudly just outside my not very soundproofed window much of the night). I am staying til Sunday, at which point I will finally head back to New York. After more than a month on the road, I am ready (even though I am excited to be back in Morocco).

Yesterday I spent sometime at the Berber Museum at the Jardin Majorelle (where I am staying), which I found really fascinating. I really didn’t know much at all about Berber culture before seeing the museum, and it was quite an enriching experience. The curator, Bjorn, is a really nice guy who showed me around a bit and explained a lot of the pieces to me. I was surprised to learn what a large population of Berbers were Jewish, and what a strong impact they had on the culture. Bjorn was telling me that it was quite a devastating loss for Morocco when most of them emigrated away (largely to Israel) in the middle part of the 20th century.

The museum visit serves as an excellent intro to the trip I am taking over the next few days. We leave tomorrow on a 5 day journey to the south to visit a number of berber sites (see the pic below). It looks to be pretty amazing. I am not sure what internet access will be like, so I may not be blogging every day, but stay tuned.

I took a brief foray into the medina of Marrakech yesterday, and it was pretty interesting. I admit to being a little concerned at the beginning that I would get lost, but with my new local cell and internet service on my phone, I could tell pretty well at most points what direction I was heading in, even if not all the pathways were mapped. As I made my way through the medina and its souks (the two words are somewhat interchangeable in these contexts, since much of the medina is taken up by the souks), everyone was very friendly. A little too friendly. And every time I was on my way out of one side of the medina, people would try to stop me with such gems as:

“Sorry my friend, that way out is closed”

“My friend, Jemaa el-Fna (the main square) is this way, don’t go that way”

Although it has been a few years since I have been in India, I remember this type of vender strategy well, and was not taken in. They were quite persistent though, and seemed really bothered that I was not heeding their warnings not to ever leave the medina.

Later in the evening I met back up with Jai and his friend Bjorn for some lovely dinner conversation, and I was surprised a bit by how cold it got at night since it was so hot in the day, but that is the desert for you. Today I think I will check out the gardens and lounge by the pool a bit. I am on vacation after all. I took a few pics of the medina yesterday, which you can check out by clicking through to the gallery below. 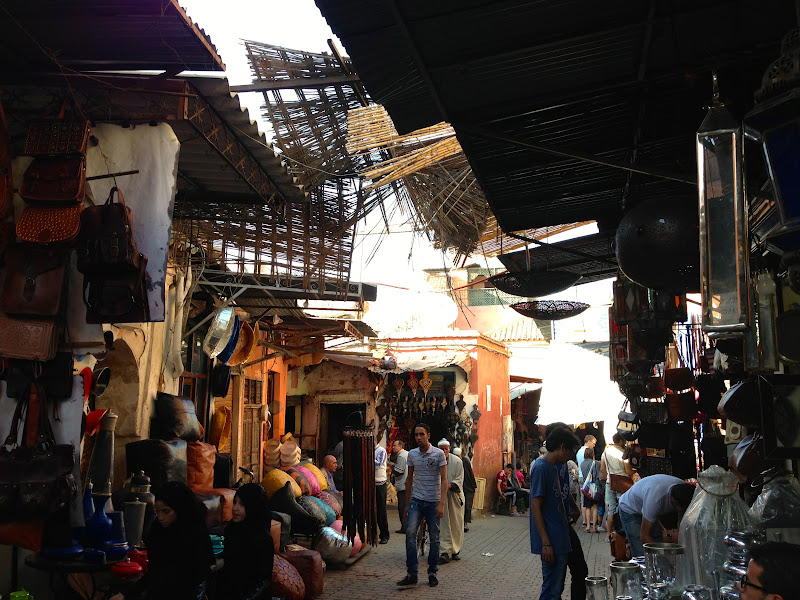 From Into the Medina