For a gay man, there are a bunch of semi-legendary places that are known throughout the culture.  These places have some historical connection to the gay community. Cities like San Francisco. Neighborhoods like The Village in New York. Islands like Mykonos in Greece. In my head, I have lightly maintained a list of such places, with a vague curiosity about them and (perhaps) a desire to visit them one day. (Hell, you know me. I want to visit almost every place, gay or not in this world).

My cousin Josh and I were trying to plan a little get away over the past few days, and when I mentioned to Josh that I had never been to Fire Island, he was slightly aghast and determined to show me the wonder of the place. We hatched a plan to go for the day (and perhaps the night) and met at 6:40 Sunday morning to catch an early train from Penn Station. A train change, shuttle bus and ferry ride later (about an hour and a half) and we landed in the harbor (marina?) of the Pines area of Fire Island.

Architecturally, I find the Pines area of Fire Island to be rather fantastic. I really haven’t ever seen anything like it, especially the system of raised boardwalks that connects all of the houses and serves as the “street” system. There are no cars allowed on the island, and this is part of what gives the place its charm.  We first went to the beach, and although it was quite a windy day, managed to have a relaxing couple of hours there before exploring the island. After that, we walked along the many boardwalks of the Pines, and over to an area known as Cherry Grove before looping back to the Pines along the water and through a forest dune. The area in between the Pines and Cherry Grove is filled with sand and brush and is charmingly known by it’s nickname, the “meat rack”. (I leave you to divine the meaning in this epithet.)

I was going to say that a vacation atmosphere suffuses the place, but that would not be quite accurate. People have a far greater sense of belonging and ownership here than merely vacationing. There is a strong sense of community to the place, and wherever we went we ran into people that we knew, and were invited to various houses for parties or drinks or pool sitting or just hanging-out-and-getting-to-know-yous. Season after season, groups of (mostly) gay men rent houses for the summer, and come out as often as they can for the relaxation and community feel of the place. They develop “house rules” depending on their want and their kind. Some houses are tranquil places where friends all cook dinner together and relax all the time, some are houses with parties going full tilt. We visited one of each yesterday, and I gather there are many more types, but I was really amazed at the reception. We were able to leave our bags at one such house while we went to the main part of town for a couple of the famous “Tea Dances” with the throngs. By 8pm, we were well and truly beat after a very full day, and although we had offers of places to stay, we decided to come back to the city. Although we were only gone a single day, I have to admit that the character of the place and the fullness of our day made us feel as if we had had a week’s vacation.

One of my favorite parts of the day was actually our walk back to the house to pick up our bags. It was dark out, and the only light was that coming from the houses, and it was truly beautiful all along the boardwalk. I was surprised that everyone leaves their doors open, and sure enough the door to the house where we had left our stuff was unlocked with nobody home. We walked in, got our stuff and took the path back to the harbor, catching the ferry just as we arrived.

I also have to say that I was a little cynical about the place before going, having heard fawning tales about it that seemed a little over the top. I still had wanted to see it (after all, it was on the list), but didn’t expect to enjoy it so much. I definitely want to explore the community of the place further, and I will be going back sometime. 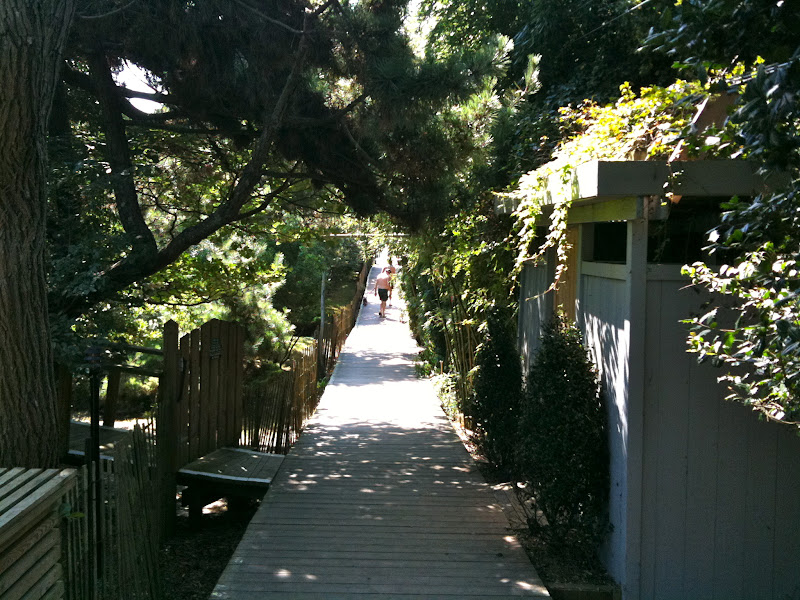