…from Haridwar by private car sounds rather glamorous, and by Indian standards, it kind of is. After reviewing our options (train, bus, and car) we decided to splurge on the private car because it seemed like it would be the fastest, at an estimated 4 hours. And the cost to hire a private car and driver to take us to Delhi was by our standards quite a good deal at about 50 bucks, so we decided to go for it. As for the 4 hour estimate, all I can say after the fact is Ha. Ha. HA. The journey took about 7.5 hours total, as there were a shit-ton of obstacles in our way. For much of the journey, there was a pea soup level fog surrounding us. There was also all manner of badly constructed road, missing pavement, potholes, piles of dirt and stray pieces of metal, wood, and what-have-you. On top of that, there was crazy traffic. At various times we were stuck behind people walking or auto rickshaws or families of 5 on a single scooter or tractors pulling giant bails of sugarcane to market or just run of the mill traffic jams. And of course, the occasional single cow or herds that were leisurely crossing the highway. And then there was the driving itself, which is quite interesting in this part of the world. Drivers here have a pathological need to be in front of the person in front of them, and will risk any amount of danger to get there. This usually involves crossing to the side of oncoming traffic to zoom ahead of whatever is in front of us. This results in a series of quite near misses in an epic game of chicken, since of course the drivers on the other side are all trying to do the exact same thing. You can imagine how the thick fog added an even greater element of delightful surprise to this little game, as sometimes headlights would emerge directly in front of you with only seconds to spare. Fortunately for me, I am used to the culture of driving in India, but I am afraid that for poor Ken (who was sitting in the front seat) it was a bit more harrowing. I tried to explain that while incredibly stressful at first, once you have made peace with the fact that any drive in India could be your last, you kind of just relax into it and hope for the best.

Once we arrived in Delhi and peeled Ken off the ceiling of the cab, we were warmly welcomed by Meeta and Digraj, and into their lovely home. And after a few stiff drinks in a local bar, Ken and I were much restored from the day’s travel. I am looking forward to spending a few days in Delhi, showing Ken around and getting caught up with my friends.

At the lunch counter of the most excellent “Sieglo XX” in old San Juan (where the flan is to die for, btw), we met a lovely young woman who suggested we visit a place called “La Parguera”. We hadn’t heard of it before but are nothing if not adventurous, so we decided to head out the next day, take in part of the famous “Ruta Panorámica“, and head over the the other side of the island for a look see. The Ruta was mostly covered in fog and alas, not very panoramica at all. It was also very twisty and turny. This, combined with Josh’s amphetamine-around-every-corner style of driving made me almost hurl, many times over. I was fortunately mostly recovered by the time we descended into La Parguera. We hadn’t realized before getting there that this was no ordinary beach, but a series of lovely small islands off the coast. So we negotiated a boat ride and spent two hours on one of the loveliest tiny islands I have ever seen. And for most of the time there, we were completely alone. There was literally no one else on the island. It was beautiful and calm and I had a great mediation here. I highly recommend this place.

Josh and I just had a rather harrowing adventure trying to drive into Rio. A number of unfortunate coincidences conspired to drive a wedge of fear and loathing into us. First, the weather was horrible, with a relentless rain most of the way. Second, the strange deviation that the road took had us ending up in a not so nice part of Rio, a problem compounded by the fact that there were suddenly no signs with any recognizable place names to tell us where to go. The coup-de-grace was some of the worst traffic in human history (making us long for LA), allowing us to move at only a glacial pace, and causing Josh multiple cramping with the car’s manual transmission. In one of our darkest moments, I called our friend Anderson who gave us some tips for finding our way based on the signs we were seeing (“whatever you do, DON’T go to Niteroi!”) and after an excruciating amount of time and a good deal of luck, we finally ended up at our rental flat in Ipanema. Now that we are here, Josh and I are very happy indeed, and are once again on speaking terms. We are now going to treat ourselves to a fancy meal.

On the way back from dinner with my parents and their friends, I was playing around with the gps/google maps combo of my new iPhone (yeah, it is buggy but super cool. I’m keeping it after all). I decided to look up directions and see which way it would tell us to get home from where we were on the north side of town. It was doing fairly ok until it made a less than optimal suggestion for a turn off the highway. 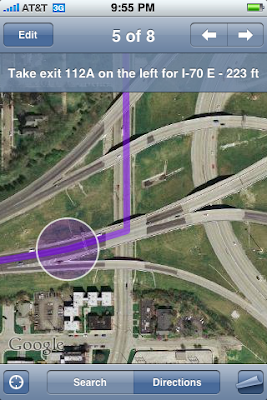 As you may have surmised by looking at the photo, there is no exit at this place. Google just told us to careen through the barrier, off an overpass, and land on the street below.

One item I neglected to talk about during my road trip with Aranud, even though it was a main feature of each and every day, is the profusion of topes (speed bumps) on every road and in every area we visited.

Mexico is a country of speed bumps. Sometimes there are signs warning you of their existence, sometimes you just lose a muffler or bang your head into the roof.  They come in many shapes and sizes.  Sometimes a single, sometimes a triple, sometimes a small mountain.  Sometimes they are painted to warn you, sometimes they blend in to the road with greater camouflage than the best chameleon.  Sometimes they are built by the government as part of the road system, sometimes built privately by people that want to slow you down for any number of reasons such as children in the area, the desire to slow traffic to allow them to exit their driveway more gracefully, or the possibility that you might see their shop and stop to buy something.  They are not restricted to residential areas and may show up in the middle of a highway.  To make things even more confusing, often there are “mini” speed bumps called vibradores in advance of larger speed bumps, toll booths or just because someone was feeling perverse enough to lay them down in your path.  I assume all of this helps to reduce traffic fatalities, but it must exact a heavy national toll on auto repair. Rocco and I are heading to Oaxaca tomorrow for the weekend. We have decided to rent a car. It is actually less expensive than taking the bus, and the added mobility will allow us to see some other cool stuff like Monte Albán.

That’s right, I will be driving in Mexico. I hope I don’t cause any incidents of La conducción agresiva.