Today started off a bit strange and sad, as I went with Boris to the gravesite of his friend who died a couple of days ago. The mother and father and a few family members and friends were there, and the whole thing was just heartbreaking to watch. He was clearly, deeply, loved by his family and friends, and his father in particular was inconsolable.  For one thing, he was the only child.  For another, he was so young, only 33. One of the other things that made it even more sad was that his boyfriend of two years was there, but to most of the family they just thought of him as a good friend. Only the mother and his friends knew he was gay, and in this part of the world it is the norm for the families to remain in the dark about it. So the boyfriend could not really be included in a way befitting the partner of someone who has just died. Everyone took turns lighting candles at the head of the grave, just behind the large tombstone. They sat around and shared remembrances (not speaking Serbian, that is what I assume anyway) and crying and consoling each other and arranging the massive pile of flowers on the grave, and after a while we left. I feel so bad for everyone involved, I had even met this friend of Boris’ when he came to New York a couple of years ago, it is such a tragedy to die so young and so suddenly.

After that, Boris and I went for a meal of heavy crepes, then walked around the old Belgrade Fortress, and then for a drink by the water.

No, it is our scary present. Josh and I had decided to take one of the boat cruises to Alesund from Bergen, as the views were supposed to be quite nice and it was the only way other than by bus to arrive. We didn’t realize that we would be on such a large boat with people who are twice our age, and on a serious 14 day trip to boot. They have meals in the dining room while we eat salami and cheese sandwiches in our room. They are allowed to go on extra excursions while we stay on the boat. They listen to motivational speakers in the seminar room while we explore the many ugly decks of the ship. And they sleep while we take blankets and sit on the deck to bask in the midnight sun (such as it is with the rain and cold, anyway). Josh and I have never felt younger in our lives, as the average age on this ship I would estimate at about 70 or so. During the orientation where they were talking to the normal (full board) passengers about all of their possible eating times, they noted that people gain an average of 4-5 kilos on such trips. That didn’t surprise me much looking at this lot, as they hardly seemed the type to exercise much. They mostly sat on the upper deck, indoors, and stared out the window with a scary passivity. And when you add in how absolutely horrific the interior design of the ship was, the whole scene made me feel kind of melancholy. The weather was pretty bad for most of our day and a half long trip, but there was some pretty nice scenery along the way. We were only onboard for a day, but it somehow seemed like a lot longer than that. Maybe this is why older people take these long cruises; it makes life seem to last a lot longer than it otherwise would. 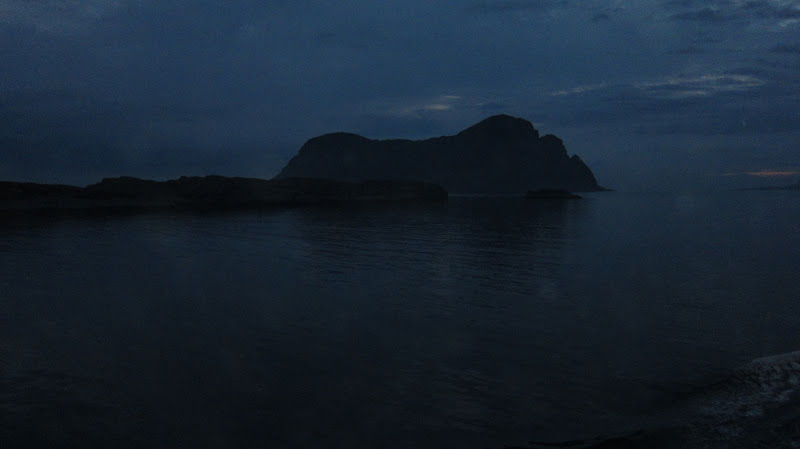 Today, after a satisfying visit to the MALBA art museum, I took a stroll down to (and then through) The Recoleta Cemetery. Talk about a city of the dead, boxes and boxes all lined up with sealed coffins in them. There are quite a famous number of Argentine luminaries buried here, and of course the biggest draw of the place for checklist tourists is the tomb of Eva Peron. For the most part the place was deserted until I got to her tomb. Then there was a long line of people snapping photos and ooh-ing and aahing. Frankly, hers was not one of the better designed mausoleums. 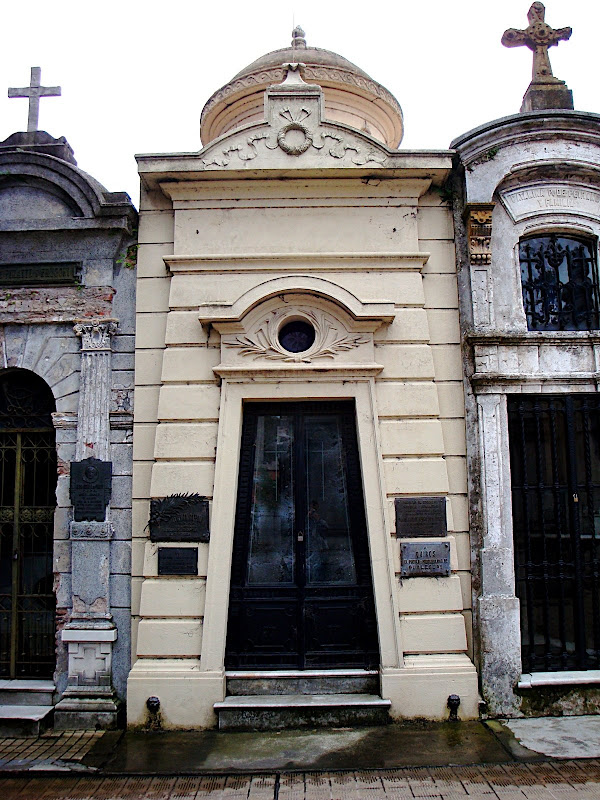 I had a strange dream last night. I was in some group setting, a day was passing normally and I found out from my doctor that I only had that day to live, that I would die by morning. A lot of the rest of the dream was very mundane, interacting with people but not letting on that I was going to die. At the same time, I kept checking myself for any sign that I was about to die. I kept concentrating on what the sensations were in my body, thinking here and there that I was about to detect an oncoming heart failure or stopping of breath. And the more I searched within myself, the more elusive the feeling of passing or death became. Time kept passing and I felt the doctor had to have been correct in his prognosis, and yet I wasn’t dying. I realized that I was spending a lot of time held in this strange moment of the anticipation of death. I wasn’t anxious or afraid, but neither was I completely calm or centered. As I waited (and waited) for Godot, I eventually woke up.