I was cleaning out a few things today, and came across the always delightful “The Gashlycrumb Tinies” by Edward Gorey. It is a little book of line drawings with the names of children, one for each letter of the alphabet, and a description of how they perished. My favorite was (and always will be) Neville:

I have had a lot going on in my life recently, but I finally finished reading a book I have had for a while, “The Girls from the Revolutionary Cantina“, by Mike Padilla. (Full disclosure: Mike is one of my best friends, and I have more than a passing shame at waiting so long to have read his first novel, which came out a few months ago). The book tells the story of a group of Latina friends in the San Fernando Valley, centered on the main character of Julia. I was completely riveted by the unexpected twists and turns in the plot, the story a compelling and relatable soap opera of friendship’s ups and downs and evolutions. And when I say soap opera, I mean it in a good way. Mike has an amazing way of making disparate events come together in believable, thrilling climaxes. He is able to capture something essential about the flavor of his characters’ lives while reaching into all of ours. In particular the idea (that has long been central in my own experience) that one never knows what is “good” or “bad” as the events of our lives unfold. And how so very often the seemingly worst events turn out to be the best thing to happen to us, altering our lives in incredible ways. I thoroughly enjoyed the trip I took with these characters (I would love to see this made into a movie), and I highly recommend it.

I just finished reading Michael Pollan’s slim new book, Food Rules. In this small volume of 140 pages made up of 64 rules and a lot of white space, Pollan dispenses some mostly common sense advice about how and what to eat.  Rather, most of it seems like it should be common sense, but let’s face it, this country has a severely screwed up relationship to what we eat. Many of the things he suggests I have been doing for years. I stay away from soft drinks and avoid products with high fructose corn syrup whenever I can. But some of the most interesting and valuable things he is advocating for have to do with how we consume our food, and the culture around it. I have long complained about the fact that Americans judge value based on quantity instead of quality. Nothing disturbs me more than to hear someone talk about how great a restaurant was based on how much food was piled up on the plate. I mean, most people would rather have a heaping pile of crap than a couple of bites of something really tasty. Pollan points out that we should be eating more slowly, savoring our meals and that whenever possible we should eat with other people. We should (in a kind of Buddhist way, actually) pay attention to our process of eating and chewing, instead of plopping down in front of a TV. In short, we need to be more connected to our food and by extension our bodies. He also has a lot to say about food processing and what a terrible toll it has taken on our health. Some good advice has to do with not eating anything that has ingredients which you can’t imagine growing in nature. And of course a reduction in meat has all kinds of benefits that he points out. But what I like about him is that he isn’t an absolutist, allowing for the reality of our omnivore selves while advocating for a little moderation and perspective. Simple but highly recommended book.

Being the lover of vocabulary and obscure words that I am, I find this account of reading the Oxford English Dictionary to be extremely enticing and uproarious in places. Each letter of the alphabet is a chapter, with a brief story followed by selections of definitions from that letter.

The Book of Dead Philosophers, by Simon Critchley

Being fairly recently obsessed with how we relate to dying and nonexistence, I find this recounting of the circumstances of 190 or so philosophers’ deaths through the ages to be compelling reading indeed.

Just finished reading a great book by Sheila Suess Kennedy called “Distrust American Style” (full disclosure: The author is well known to readers of this blog and to me as “Mom”). In it, Kennedy discusses widely held beliefs and recent studies that seem to show that increasing amounts of diversity within a culture are correlated with increasing amounts of distrust within that culture or those communities. As correlation is not causation, Kennedy clearly lays out a case for the causes of that distrust. Ultimately that distrust comes from a lack of trust in our collective institutions, caused by years of abuses of power and ineptitude within those institutions. Kennedy sees the lack of trust as a logical and self protective result of these abuses, and argues powerfully for ways to restore that trust. Especially fascinating are the sections that deal with the founding of this nation, and the attempts to limit the power and potential for abuses by government by carefully constructed checks and balances. Kennedy discusses at length how these arose from the Enlightenment and how they were an effort (having just broken free of a monarchy) to limit the power of the state over free citizens. By carefully insuring that no one branch had absolute power, the Founders were hoping to insulate the populace as much as possible from the abuses of potentially flawed or power hungry office holders. That is why the shift of power during the Bush years to the Executive Branch was so corrosive to trust in our governing institutions. These shifts allowed power and lawlessness to be concentrated at the highest levels, and led to serious abuses. It is for precisely this reason that even though I love most of what president Obama is doing in office, the one area that concerns me is in his administration’s defense of some of the executive privileges claimed by the Bush administration. It matters not who wields this power, it should be curtailed to prevent abuse by anyone. Kennedy understands that in order to trust in our governing institutions and the power they wield, we have to be able to trust in their basic fairness and application. Her proposals (at the end of the book) for improving this trust are sensible and in my opinion, necessary.

And on a personal note: Good job, Mom!

View from the stage of the former theatre and current El Ateneo bookstore. 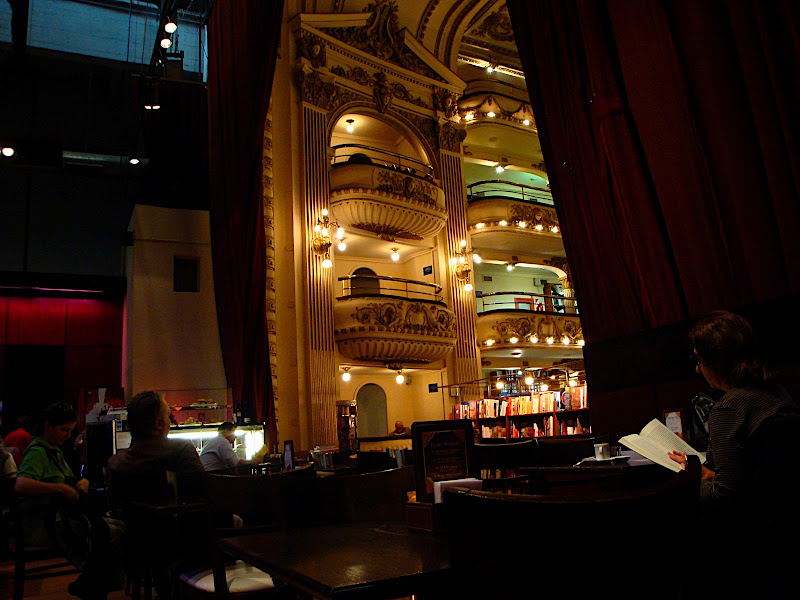 Every so often a book or movie will generate strong feelings of loathing that seem to reveal much more about the critic than the work. “Eat, Pray, Love” by Elisabeth Gilbert seems to be just such a book. Over the past few weeks (and months) I have met several people for whom this book seemed some sort of personal affront. I read the book, enjoyed the writing style and the subject matter, and would recommend it whole-heartedly. It didn’t change my life, but I definitely appreciated it. But a number of people I have met recently who don’t like the book REALLY don’t like it. They take some very personal umbrage. Whether they believe it to be “self absorbed and narcissistic” or “fake” or “new agey”, it seems to touch a very deep anger for reasons that elude me. Just the other night was the most recent example. I was talking to some guy at a bar. We were making small talk and he asked me what I do (the classic American question). I started talking about my trip of the last months and as I was describing India he interrupted me with an abrupt “Have you read Eat, Pray, Love? I f*cking HATE that book!”.  I do think that the book was an easier read for me personally because of the nature of my own journey over the past couple of years. And I understand that not everyone will “get” the parts that are most foreign to their own personal experience, such as the description of time in an ashram in India. But there is something more, a kind of anger that the world (through its bestseller status) should reward this kind of thing. People I have spoken with feel that Elizabeth Gilbert is somehow “pulling one over” on the world with her memoir. They desperately search for any sentence or situation in the book that they feel is less than perfectly authentic or real and shout “aha!”. My feeling is “who the hell cares?” What, exactly, do they think this woman is duping the world with? Why does it bug them so very much? What does it say about their own hopes and fears and insecurities? Is it “unfair” that she got to take this trip? Is it “self-absorbed” any more than any memoir? I don’t know, but it is curious.