Juan Carlos and I packed about as much culture into our last day in Buenos Aires as one would think possible. We went to a fantastic Duchamp exhibit at a new museum called PROA, walked around La Boca, met friends for lunch at Mott in Palermo, booked tomorrow’s Buquebus tickets to Colonia, went to MALBA, walked to El Ateneo and finally went for a goodbye parilla.

I am going to miss Buenos Aires, it is a fantastic, sexy city. It is interesting that I have a hard time putting my finger on exactly what it is about this place that is so enticing. There are not a lot of great landmarks, no particularly amazing architectural gems, not a lot of destinations in and of themselves. Overall (and despite Argentine protestations to the contrary) this is not a foodie destination as Argentine cooking is fairly bland and basic. But the collective fabric of the city is incredible, and the feel of it makes you want to wander aimlessly, criss-crossing the town by day or night to soak up the fantastic energy of the place. The people are friendly and welcoming, and it seems like there is always something to do with friends new and old. Buenos Aires is one of those places that makes me feel strangely at home and at ease, but also feels so very sophisticated. I will definitely be back.

Continuing my investigations into the minutiae of Buenos Aires life, I want to share with you two more small signifiers of the culture here.

– Inexact change. In almost every situation involving paying for something (restaurant, store, pharmacy, grocery) if you or the vendor doesn’t have exact change or can’t give exact change, everyone just lets it go. It seems that for anything under a peso (about 30c) this is true. Everyone makes do with what they have and provides whatever centavos they have, but if a few are missing in either direction, no big deal. I can’t imagine this working in a place like a grocery in the US, where everything is accounted for to the penny. I am not sure how it all works out in the end, but I like this easygoing attitude about a few pennies.

– Dog walking. This could well be a feature only of my slightly upscale neighborhood (Palermo), but I notice on a daily basis an inordinate amount of dog walkers, usually leading a group of about 10-15 dogs. During any given day I will come across at least 3 different walkers, one day I counted 7. Are there really THAT many dogs in (this part of) Buenos Aires? Perhaps that explains all the shit. 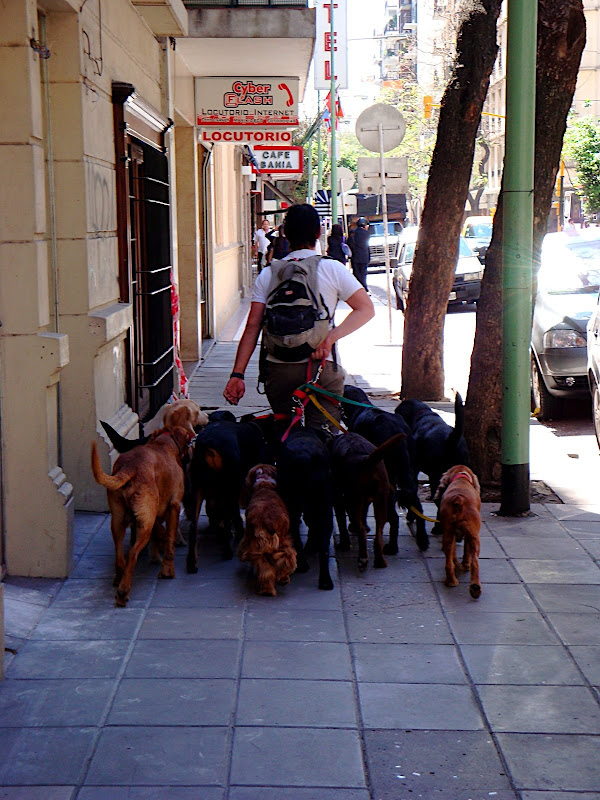 I’m a lucky bastard. I have the good fortune to meet wonderful people from all over the world. People who invite me to visit, for a meal, to go on outings, or who share their culture with me in a variety of ways. Today I was invited by two such people I met recently, Philippe and Roberto, to come spend the day with them in their little island home away from BA, in a place called El Tigre. El Tigre is the name of the delta region north of Buenos Aires. It is also the name of a small town that is sort of the gateway to the islands of the delta. The delta region is a fascinating and vast place, with a huge number of islands, some simple, some fancy, some wild and some quite developed. The weather was perfect, and we had a lazy day of eating and drinking and walking the island their house is situated on (called Santa Monica), followed by a fantastic boat trip offered by one of their neighbors to tour some of the delta. One could spend many days and not see all of it. In some ways it reminded me of the backwaters of Kerela; in others it reminded me of the Atlantic Intracoastal Waterway. And yet in others it is totally unique. It is also super cheap and easy to get to from Buenos Aires. I just hopped on one of the frequent (every 20 minutes) trains at the beautiful Retiro Train Station, after buying my ticket for (I kid you not) 35 cents (US). Roughly 45 minutes later, I was in El Tigre.

My friend Guillermo yesterday introduced me to the custom and ritual of mate (pronounced mah-tay) drinking. The history of this drink is rather complex (you can read about it here) so I won’t go into it, but basically it is a kind of herbal infusion made in a particular way and served in a gourd with a special straw to filer out the herbal mix. If that were all there was to it, it would just be an interesting local drink. But the part that really fascinates me is the drinking ritual. The same cup and straw is passed in a circle to as many people as are present for the drink. Each one drinks until the water is gone and the server adds more and passes it back for the next person. This continues (but only one cup at a time per person) until as many rounds have been made that all are satisfied. I couldn’t help but feel slightly illicit in passing this thing around.  There is nothing other than a few coffee-like stimulants in the mate, but the action of passing it around and hearing that slurp sound as the cup was emptied reminded me of nothing so much as my college days and sharing bong hits. 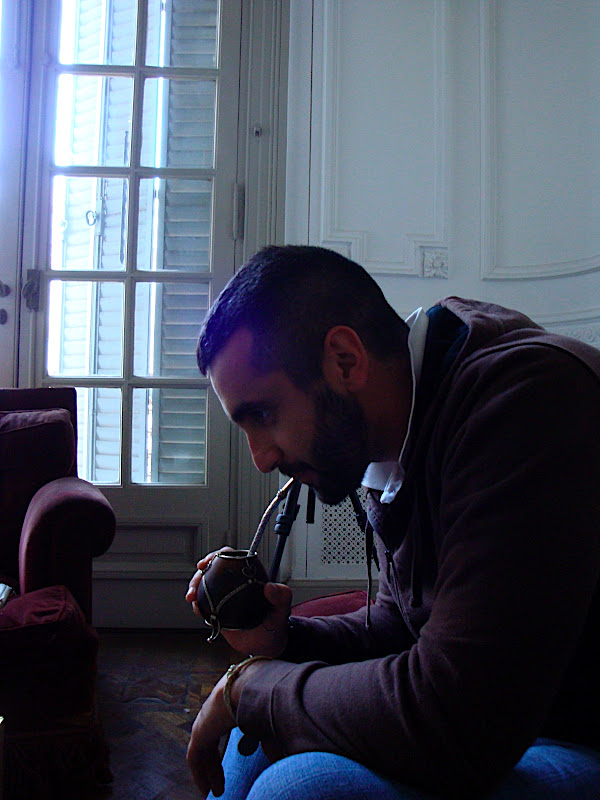 Last night was my first introduction to Tango (actually seeing it danced live anyway). I was invited by Philippe (a friend of my friend Alok from Mumbai) to go check out a gay milonga (Tango hall) in BA called La Marshall.  The place starts out as a class early on, followed by dancing for the brave/experienced. The music, although all Tango rhythms, was quite eclectic. One of the pieces seemed so familiar to me, but I couldn’t put my finger on it until…”Wait! Is that the Beatles’ Yesterday?!” and sure enough, it was the same melody, reworked for the dance. Being partnerless and a little intimidated by how complicated the moves seemed, I decided to sit this one out, but resolved to learn a move or two before leaving BA. I loved the music and the energy of this place. When one particularly sad song came on, I mentioned it to Roberto (Philippe’s partner), and he told me that all Tango music, and Tango itself, is melancholic by nature. No wonder it appeals to me, I love melancholy. It was especially interesting to see how the crowd interacted with each other. All manner of people were asking strangers to dance with them, and Philippe told me that this is how it is with Tango halls everywhere, you don’t just stick with your group or partner. And for a gay Tango place, this one was pretty mixed, with the asking and leading being done in all manner of combination throughout the evening. Some of the dancers were quite good, and I spent a fair amount of time watching their feet and trying to figure out how the moves worked.

My friend Ricky shared with me a classic of Argentine cinema last night, as we screened the comedy “Esperando la carroza” (Waiting for the Hearse). Released in 1985, it was quite the send up of various social strata in Argentina at the time. The dialog was very fast paced and very funny. Lucky for me Ricky had the version with English subtitles. It is apparently one of those films that many people (and especially the gays) know absolutely all the lines from. So in that respect I guess it is a bit like Mommie Dearest or All About Eve.

– When I mentioned BA reminded me of Paris, I was mostly talking about the Architecture. But after walking around a lot in this city, I notice a second similarity: dog shit. It is everywhere. Apparently the Porteños (as the residents of BA are called) are as nonplussed about picking up after their dogs as the French.

– I look like everyone here. After being in so many places where I was so obviously a foreigner, it is interesting to be in a foreign country where everyone assumes I am one of them (at least until I open my mouth). In some ways (no doubt because I share a lot of the same ethnic background as many Argentinians) I feel even more like a native here (visually) than in most parts of the US.

– They absolutely LOVE ice cream here, and there are many amazing places to get it. (Now that I consider this fact, maybe I AM one of them.) My personal favorite (of the three I have tried) so far: Volta.

– Perhaps it is just springtime, but an inordinate amount of people I pass in the street are singing. Mothers to their children, young men and women to themselves, groups of friends in unison. I like it.

Ricky (a friend of my friend Daniel from DF) took me out last night to a parillada (Argentinian steakhouse) for an excellent, meaty dinner and conversation. This is so not a country for vegetarians. And while it isn’t the most romantic notion in the world, I couldn’t help but wonder how high the rates of heart disease and colon cancer must be here.

When out for a coffee and took a brief walk around this morning to familiarize myself with the neighborhood. So far, Buenos Aires seems like a mix of Paris and New York, albeit ever so slightly rougher around the edges. I think I am gonna like it here. The apartment I am renting is through an Argentinian friend from LA and his family. They seem quite sweet and helpful, and the apartment is larger and nicer than it seemed in the pictures. I am hoping to relax into BA, and get some writing done this month (which I hope will be possible; there seems to be a big construction project going on right next door). Stay tuned for my many misadventures here. 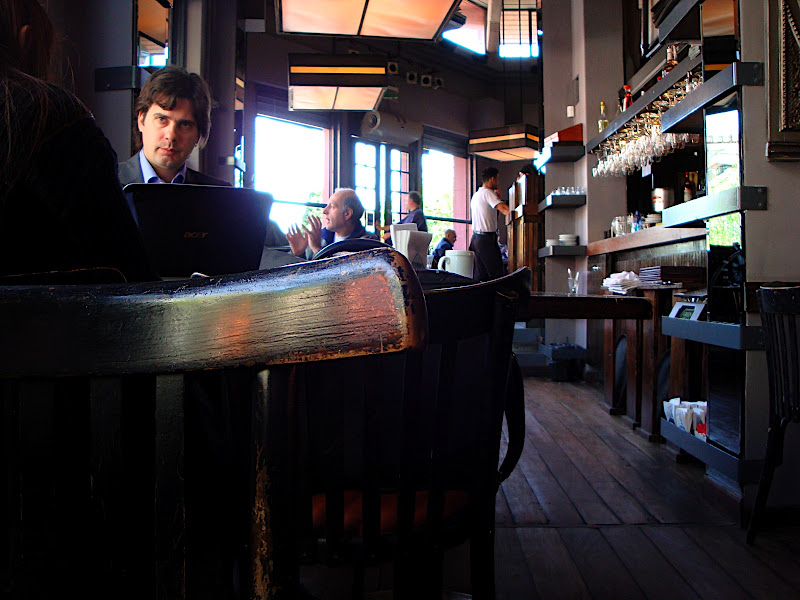