Irene turned out to be a total dud, and after all my preparations. We kept waiting for the show outside my window with some trepidation and excitement, but by 2:30am we gave up and went to bed. That said, we had a kind of fun ready-for-the-apocalypse type weekend anyway. My friends Gonzalo and Ric stayed over and we cooked a couple of meals and watched hours of TV waiting out the storm. Josh’s bf Michael came over yesterday and had dinner with us as well. All in all, a fun, lazy, convivial weekend. Today it is back to work, full steam ahead. I let the drama of Irene de-focus me somewhat from my work late last week, and I really need to hunker down (in the work way, that is) for the rest of the week. I do want to share with you a glimpse of some of the devastation left in Irene’s wake however:

Irene is all the talk around town today, and I thought I would take a little extra precaution and get some water and dry snacks from the Duane Reade across the street. Apparently, many other people had the same idea, as all the gallon jugs of water were sold out, the entire shelf bare. I got a couple of smaller bottles and went to the checkout which was abnormally long for the middle of the day. Apparently the hurricane is really headed right for us, and the city is closing down the subway system tomorrow for the rest of the weekend, as well as ordering a mandatory evacuation of the low-lying areas. I myself live in at the edge of the lowest risk (but still an) evacuation zone, so it is possible (with a category 3 storm or higher) that we too will be evacuated. This all feels a little surreal, but then weather events of this magnitude are somewhat rare for New York, and I suppose it is better to be safe than sorry. My plan at this point is to have a few friends over for a hurricane slumber party and watch old episodes of  True Blood (a show I have only recently started watching), which seems somehow appropriate for the coming weather apocalypse.

I went on a date last night with some guy I met online (OK Cupid if you must know). We were talking, having the getting-to-know-you conversation that ranges across personal histories, family, cities lived in, etc. In and among the chatting, it turned out that we had both lived in San Francisco before, and coincidentally for much of the same time. And then, as he was describing his former place of work there, something clicked and I realized we had met before. The vagaries of how the memory works are mysterious to me. I am not entirely sure why certain things stick in our heads and others don’t, or why these things remain buried for years and years with nary a peep until something calls them forward. Only a few jumbled pieces were coming to me. I remember talking at a party and thinking this guy was quite sexy. I remember having a slight crush on him at the time, but that nothing ever happened between us. I remember (vaguely) bumping into him in a couple of other situations in SF at that time. And that was it, but it was enough for me to marvel that after all these years he should contact me to ask me out on a date. And although it was slight, I noticed that this past feeling of longing was somewhat coloring last night’s date, and that I felt myself slightly more attracted to him than I would have been had we just met for the first time. It was as if my younger self was still wanting a chance with his younger self. And the date itself went very well, drinks moved on to dinner, and we had a wide ranging, easy conversation that I honestly enjoyed. Since we were close to my place, he walked me back and I invited him in for a few minutes. He made some remark about it not being a good idea to come up, but did anyway and soon we found ourselves on my sofa talking when he planted a kiss on me. And then we kissed more fully. It was pretty awkward and awful to tell the truth, and whatever spell had been cast by my younger longing was pretty instantly broken. I suddenly had no desire for him at all. I quickly moved off the couch to get more water, and repositioned myself a little bit away from him. We made some noise about seeing each other again, and I led him to the door. He was a nice guy, and someone I wouldn’t mind being friends with, but I am not the same person as I was years ago, and neither is he. As he left, a big smile crossed my face at the circularity of things, and how years and years of distance can suddenly touch each other across all that time and space. Even for those things you had no memory of, and that seemed so small and insignificant.

This is getting ridiculous. Every few months it seems, you crawl out of your suburban hole, fill out my email address on various websites ranging from cheap magazine promotions to jewelry stores to pet supply products (and strangely, even Men’s Health Magazine…is it for the soft porn allure of shirtless men, Sandy? Are you trying to convince your flabby husband to get in shape with a subscription?). Enough already. You, Sandy, have been a bit careless. You have left clues that have allowed me to trace you to your ugly tract house on Golf drive in San Jose, California. I surmise from the look of it you lead a somewhat empty existence. Perhaps you are suffering some sort of existential crisis, one that can only be assuaged by consumer goods and promises of unattainable health and beauty. Perhaps that is why you get your thrills filling in web forms with legitimate seeming email addresses that happen to belong to someone else. Sandra, this is very bad karma indeed, and if you don’t stop I fear you will be reincarnated as something rather unpleasant like a dung beetle, or more fittingly, one of the animals they use to test your cheap cosmetics on.

I was visiting NYU Medical Center earlier today for some lab tests my doctor had ordered for me a while back. During the intake, among other administrative questions, they asked me my religion. I was so taken aback by this question that, seeing the cross hanging on the neck of the man who was admitting me, I angrily blurted out “Atheist.” What I should have said was “None of your god damned business.” He backpedaled a little after my outburst with “You don’t have to answer this question, we just ask it…” and his voice trailed off.

So picking up the ball I asked pointedly, “Why, exactly, do you ask it?”

He replied with “They ask us to ask it, this is part of the new procedure.”

I told him that while I understood it was part of a procedure, I didn’t understand why they were asking it. For what purpose. He told me he didn’t know, and went to ask someone else, who also couldn’t tell me why they ask for this info, only that they were told to and we didn’t have to answer if we didn’t feel like it. That’s great I thought, except that now everyone in the room had plainly heard me state that I am a godless commie or whatever, and I wished I had at least said Buddhist, even though that is not a religion (any more than Atheism is, but that is how our culture views such things, alas).

I then started thinking about all the terrible ways in which this information could be used, and tried to imagine any legitimate reasons for having it. A quick post about it on facebook garnered the opinions that it could be used to either avoid lawsuits by not performing certain procedures (such as blood transfusions for Jehovah’s Witnesses) or to aid in comforting the dying by calling their spiritual leader or something at the appropriate moment. I call bullshit on both of these. Far better to just ask people to list any procedures they don’t want, and who they want to be present should they be in the process of kicking it.

Far more ominous are the scenarios I could imagine that could disturb the impartial care that any patient should expect. Imagine a strong-believing Christian nurse needing to draw blood from a patient whose chart reads “Atheist” or “Muslim” (or “Satanist” for that matter). Or who perhaps feels it is ok to ignore the call of some and hurry to the call of others in the ward with whom she has more in common. Plug in any non matching beliefs between providers and patients and you have a recipe for all kinds of abuse, both subtle and egregious. These considerations should be completely off the record. By not even having such information, it is much less likely to be abused. I am not sure who hatched this plan to ask such information of patients, but it is certainly ill-advised and creepy, whether or not one declines to state.

Today Arnaud and I walked from his place to the Regent’s Canal in Islington, and quite a long ways along it, ending up in Victoria Park. It was all part of London I hadn’t seen before, continuing the themes of my entire trip here. After that, I visited my old travel buddy Juliette who lives in Finsbury Park and who I haven’t seen since our last travel adventure together in Peru almost three years ago. After some tea and company at her place (and waiting out the rain) I met up with Arnaud again for a delightful Sunday evening London institution called The Dame Edna Experience at Royal Vauxhall Tavern, something that had to be seen to be believed. And as a final, and sweet goodbye to London, we biked back to his place just as the sun was setting, past the crowds by the London Eye, along the river front, and back to Arnaud’s place. With the slight chill in the air, and knowing that I am leaving tomorrow, I felt just a twinge of sadness, like when I was a kid and it was the end of summer. I am very much looking forward to going home tomorrow, but it is always a little melancholy to leave a place where you know and love people, even if you are going to another. 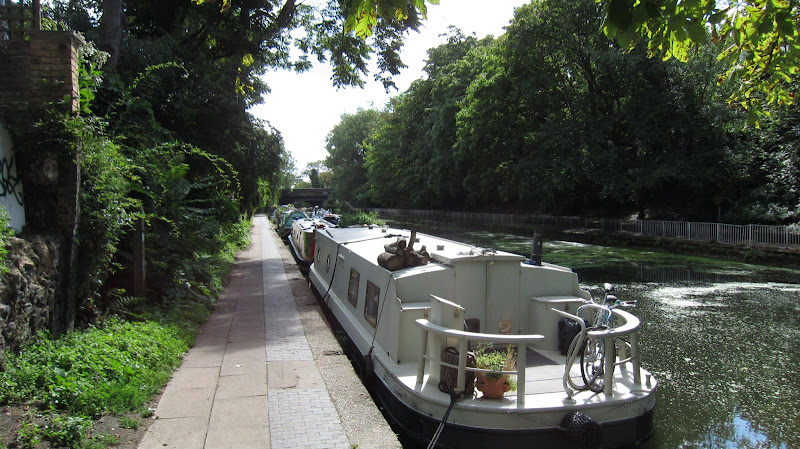