The last couple of days have been a little light on work, and surprisingly nice weather, so we have filled them with a couple of bike rides. As with many mostly flat cities in the north of Europe, Hamburg is definitely a city for biking. There are paths everywhere and it is very popular and easy to get around by bike. Yesterday, Olaf, Nico and I went a bit north, in the direction of the airport, and into some of the less urban areas of Hamburg. Olaf plotted a course for us that mostly seem to traverse these paths and green areas between streets and at the back of housing and neighborhoods. These spaces were mostly taken up with small plots of land called Shrebergarten, which were assigned to workers during the period of industrialization as a kind of compensation for the dislocation of urban life. These little gardens were meant to reconnect people to the land, and allowed them to have a little plot of land to cultivate. Apparently today some are owned, some are rented, and while they are not zoned for living, some people have built little cottages on them that they spend the night in sometimes. These plots are quite small, but some of them are very sweetly tended nonetheless. I found it quite fascinating to ride the paths in between them, as they go on for miles and miles, and are apparently quite common in Germany.

Today, Nico and I took a decidedly more urban ride down to the town center and through some areas of dense building. I love how many canals there are in the heart of Hamburg, crossing them is almost always a visual treat. We also took in some architectural gems (like the famous Chilihaus), did a little shopping, had a nice lunch, and headed back home.  Olaf is in Capri, Italy for the next couple of days, and so Nico and I will make dinner tonight for Michael and Fabian (it is the custom in the house for everyone to always eat together, which I find quite nice). I decided to pitch in and make a salad, which seemed a safe choice, until Michael informed me that Fabian didn’t like two of the four ingredients.  Sigh, local pickiness strikes again. 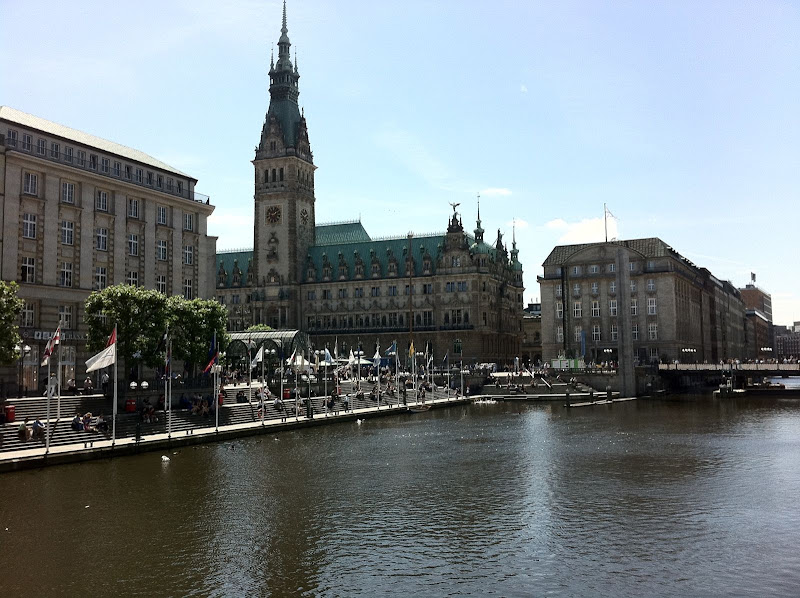 From In and out of Hamburg