The last couple days in London have been quite social, as I have tagged along on Arnaud’s social schedule. Friday night was a mini house warming at his new apartment, and last night we went to a rather fun party in a rather interesting apartment on the 25th floor of the rather famous Trellick Tower. (Note my rather British use of the word “rather” wherever possible.) One almost never gets a view from that high up over London, it was quite instructive and surprising.  The tower itself was built at a time when these types of urban developments were falling (rightly so) out of favor, but as there are so few of these types in existence in London, it makes for an interesting visit. And as these things go, this building has a lot of nice architectural details and innovations, and has therefore been what the Brits call “listed” (which is when a historic building is in protected status). Outside of that, I have been exploring the strange conglomeration of buildings and willy-nilly development that make up the old city sector in which Arnaud lives, and it has been fascinating. London is clunky in fascinating way that few other cities are.

If you ever have the chance to fly out of the Florence airport, take my advice: go to Pisa. I have rarely witnessed that spectacular a level of disorganization. I did make it safely to London, however, and landed for the very first time at London city airport. One thing I will say for this airport, getting into the city from it is far cheaper than any other London airport. For just 4 pounds I was able to get to my destination, riding first the DLR (and for the first time), followed by the regular tube. Somehow after just coming from Italy, people seemed rather dreary and dour to my eyes, a little sad to be honest. I got off at Angel station in Islington, a part of London I had never really seen before, despite my many many trips here. This is my friend Arnaud’s new neighborhood (he just moved a few weeks ago), and it has a lot of charm. I think I will really enjoy exploring the area and getting a new view on London. By coincidence, my ex-boyfriend George happens to be in town as well, and we met for Lunch today near Covent Garden. So far, the food in London is nothing to write home about (despite me doing just that here), but I am hopeful we will find better restaurants befitting a cosmopolitan city.

One of the things I have been noticing here in Italy over the past two weeks is how connected people are to the places they are living, where they grew up, etc. Whether in the villa or wineries of  Chianti, or with friends in Modena or here in Florence (away from the tourists that is), Italians seem particularly in tune with the land, the culture, the architecture, the food. They know the ins and outs of their home regions, and take great pride and pleasure in the special things that make a place unique.  They know about  the best olives or wines from the region, the special dishes that only are served in this or that time or place. They know and love their old buildings or the history of a church or piazza. Americans, on the other hand, are all about mobility and newness, casting off not only the past but any strong traditions that may hinder this mobility. This is both our strength and our weakness.

And speaking of Italians and their connections to local traditions, Jonathan took me to an amazing restaurant here in Florence last night called Il Guscio. It was one of the best meals I have had in Italy (or ever), the dishes all refined interpretations of Tuscan culinary favorites. If you are ever in Florence, I highly recommend it.

Yesterday was another easy, wonderful day with my friends in Modena. We had coffee, ate, wandered around, went to Stefano’s for risotto and company, went back to Davide’s where I tried to make myself useful by fixing his internet connection, and ended the day with a fantastic meal in a restaurant called La Cicala in a place called Torre Maina overlooking Modena. 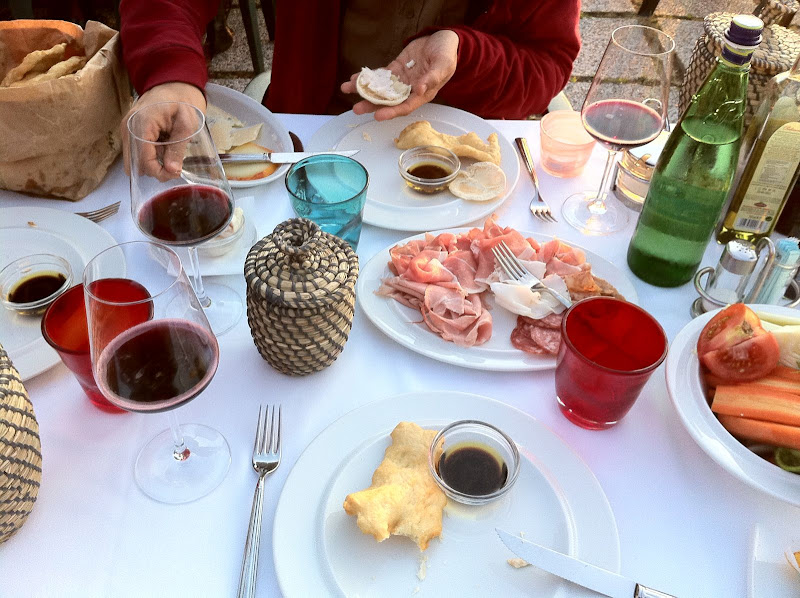 That about sums up my trip to Modena so far, but it has been far more enjoyable that the title alone would make it seem. I have had an absolutely delightful time since my arrival yesterday in the early afternoon. Davide (the boyfriend of my good friend Jonathan) picked me up at the train station and brought me to his apartment, where he made me an amazing pasta dish and then took me on a little tour of Modena. It is quite an interesting little town, and I find the architecture to be strangely uniform throughout the central city, very sober, but very pleasant. There is a refreshing lack of extraneous detail on most of the buildings, and the color palette is quite warm. Almost the entirety of the central city is pedestrian only, making for great strolling. We enjoyed a coffee and then found an inexpensive place to get our haircut. After the nightmare cut I had in Hamburg last month (they apparently thought I wanted to look like Christopher Walken, despite bringing a picture of myself with the haircut I desired), this was an amazing surprise. The guy was so precise and did such a good job that I was sad I couldn’t come back to Modena for the haircuts alone. And all that for 15 euros! After that, we went to meet Jonathan at the train station where he arrived in the early evening, then went back to Davide’s where he had prepared a delicious dinner of all kinds of Italian things, some of which I recognized. We were joined by my lovely blizzard boarders from last winter, Carla and Cinzia, and another friend of Jonathan’s,  Stefano, for a tasty and boisterous dinner. I love how animated and friendly the Italians are, and it was amazing to me how willing they all were to dive in and communicate in whatever language was necessary. The Germans seem much less accommodating in this manner, and sort of uptight at the necessary imprecision of communicating in a language they are not masters of, but the Italians really seem to get the point, which is not about correct form, but about communicating by whatever means necessary. I felt especially welcome here and it was a joy to be at the table with our various mixing of languages and words and signs, all helped along by copious amounts of good wine and food (and cigarettes of course, we are in Italy after all). At several points during the evening we were joined by friends who would stop by. First, a couple of competition circuit burpers (I kid you not) who stayed for a few minutes explaining their craft and leaving us with a demonstration so powerful that people on the street below applauded. Later in the evening after the meal a few more friends of Davide’s stopped by for more smoking, drinking, conversation and laughter. The whole evening really took me back to the time in my life when I was living in France, and dinner parties were the way to socialize. I kind of miss that spirit a bit, it is co warm and such a great way to connect with people.

As the week comes to a close here at the Villa Fabbroni, I am pretty happy with the little family reunion we had here in Italy. It was very much like one of our Thanksgiving get-togethers, but with fewer people, and better weather, architecture, history and food. Since yesterday our number has dwindled a bit, as my parents and niece left for their respective destinations. Tomorrow morning the rest of us will depart for ours. I decided to take a break from the hectic pace of sightseeing and stay at the villa and relax today, and it has been great just hanging out (and avoiding the twisty roads and crazy Italian drivers for a change). I have been thinking a lot about family dynamics the past week. This week I have seen some petty family bickering and actions at times, among almost all members of the family (myself included). But these are fleeting, and most of the time it seems obvious to me how much we all love each other in spite of the small annoyances, how lucky we are, and how happy I am to have the family I have. I wouldn’t wish things were any other way. On this trip in particular I have thought a lot about time moving on for all of us. We are all getting older, and no matter how much we might wish otherwise, our time together is limited. That is why it is so important to be here now for what we have, to notice and appreciate each other. One day, sooner than we like to think, all this will be gone. And I would like to think I was able to take the time to let my family (and friends) know how much I love and appreciate them.

Continuing our exploration of close-by towns in the region, we headed for Lucca yesterday. It is quite a bit smaller than Florence, and less touristy, which makes it a very pleasant place to visit. Especially cool is the intact city wall that surrounds the town. It has a wide path at the top that you can walk or bike on, and we had a lovely stroll around the town with fantastic views. The density of the interior of the city was a little less than I expected, and the building heights a little lower. In a few short hours we got a really nice feel for this beautiful little city, and I highly recommend a visit.  I have decidedly less nice things to say about Italian drivers, several of whom we had to confront on the road back to the villa. They seem to be playing a game of crazy drunken chicken with the other drivers, bobbing and weaving while speeding, smoking, and talking on the phone. In particular, I had a real asshole in a semi baring down on me yesterday while we were heading towards an exit. With a car going slowly in front of me, there was nowhere I could go, but that didn’t stop him from getting within two inches of my ass. After a few minutes of this not very fun game, I thought I should let him know that I didn’t take too kindly to his antics, and helpfully opened my window to give him the international sign of my middle finger. This seemed to enrage him and he started honking and weaving dramatically, further impressing on me  my new conviction that Italians should never be allowed near heavy machinery of any sort. 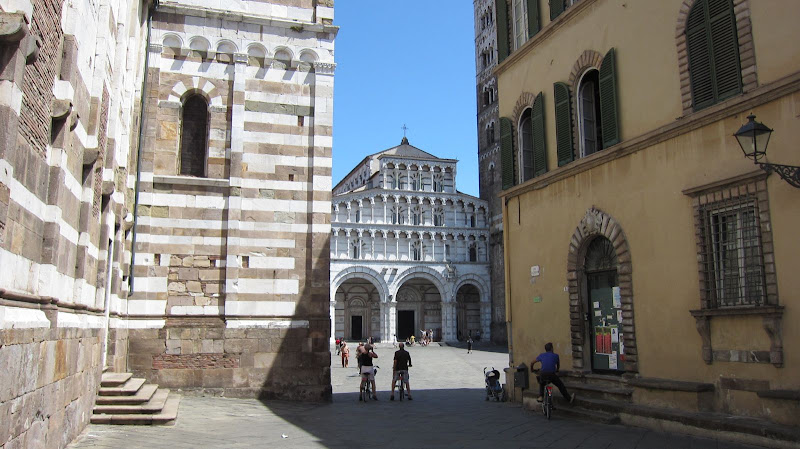 Internet at the villa was out for the past two days, and you would think that we were part of the Borg, wandering aimlessly when detached from the collective. We made do, and visited some local areas (including Florence and Castellina in Chianti), and I was finally able to upload pictures on our return from Florence yesterday. Being so flummoxed by lack of internet though, I have not prepared any thoughtful or engaging blog posts, so you will have to make do with photos from the past few days: 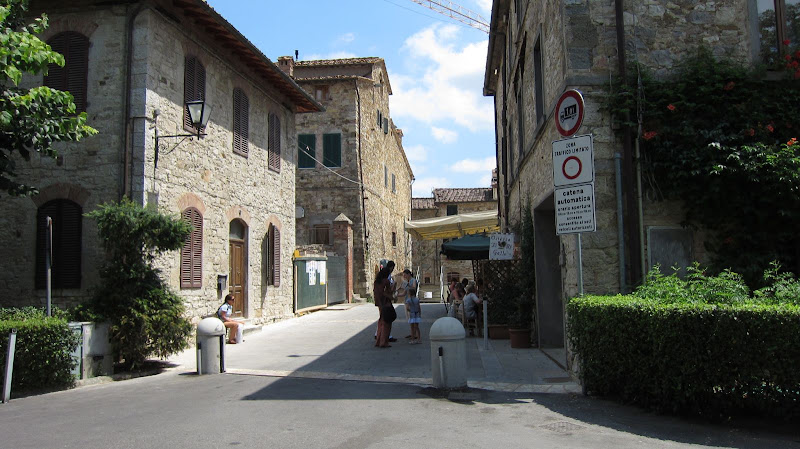 From Castellina in Chianti 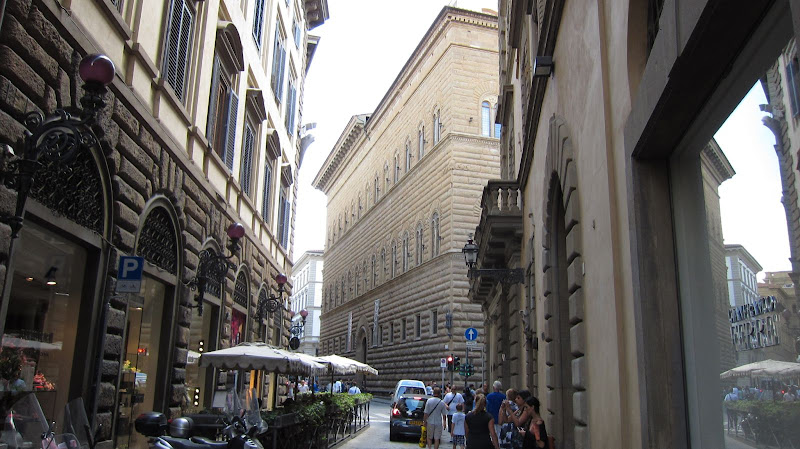