It has been really warm in LA the last few days. HOT, actually. And it was nearing 100 yesterday as I attended the outdoor wedding of my friend Cristina in Pasadena. We were all schvitzing like crazy in our formal attire, but the celebration was great. I have to admit to being really touched by their vows and the ceremony. They made a point of mentioning how happy they were to be getting married at a time when gay marriage was also possible for the first time. Their wedding vows contained references to activism and their mutal responsibility to make the world a better place, not just for their immediate family, but for everyone. The big mystery for most of Cristina’s friends before the wedding was that none of them really knew much about her husband to be, Andrew. The first time most of us had a chance to meet him was at the wedding, and I think everyone was slightly suspicious. But at the point he read his vows to Cristina, there was so much obvious affection in his eyes and so much sincerity in his voice, that he won me over anyway.

…but as I was having a beer and tortilla chips with friends of mine at a bar this evening, a tall drag queen in fishnet stockings stole our guacamole and ran down the street screaming with delight.

I met a guy online a couple of days ago and we decided to meet for coffee a few hours ago. He immediately began by telling me about an ex girlfriend that broke his heart. Then he told me about an ex boyfriend that did the same. What followed after that (in mind numbing detail) was a catalogue description of every person he has ever met in his life. This lasted roughly two hours, punctuated only by the occasional text message and phone call from his friends. Other parts of his monologue included observations about “gay guys”, moving apartments and how expensive they are, and surviving in Italy for 3 months on a few hundred dollars.

For the rest of you maleducados out there, please make note of the following tips the next time you are on a first coffee date:

– Try to ask as many questions as you answer.

– Don’t talk on your cellphone or message excessively.

– Don’t talk about your ex. Any of them.

– Don’t stereotype gay people, even if you are one. In fact, don’t sterotype anyone.

– Listen to what the other person is saying.

I loved Sex and the City, the HBO series. I have seen every episode a number of times. And while the last few of them managed to piss me off with their annihilation of most of the characters (turning each into their polar opposite), I nevertheless was very much looking forward to seeing the movie.  When the show was at its best it had extremely sharp and funny dialog and explored sex and relationship themes with a candor and nuance unmatched anywhere else. I was looking forward to a recreation of that in the film. Sadly, there was very little to be had of it.

The movie almost completely eschews breaking any new ground, preferring to wallow in the mundane and the trivial. It is suffused with the most over the top consumerism as stand in for just about any real emotion or action. In the most telling and emblematic scene in the movie, Carrie gives her (financially) struggling assistant a Luis Vuitton bag, and as she opens the present and takes it in, a symphonic melody plays in the background. I know that music. We all do. That’s the music they put on when star crossed lovers finally declare their devotion to each other. It is the music they play when they want the audience to well up with sentiment for great sacrifice or puppies. But in this context, that music is obscene. A fucking bag?!! That is what we are supposed to get emotional over? That she just got an expensive piece of consumer crap? Give me a break. And unfortunately, this is the tone of most of the movie. It was as if a group of ad executives from a number of companies got together, circle jerk style, to figure out how they could make a commercial lasting two and one half hours, and actually get people to pay to see it.

There were very few moments in the film that recalled the flair that the original series used to have, and they almost excusively belonged to Samantha. And her story arc was by far the most interesting (at least at the end) as a proud 49 year old woman decides to go it alone. The rest of the movie was at best a cheap romance novel for over privileged housewives, and at worst a disturbing “eat me” from a long list of companies.

A sign of late stage capitalism / the apocalypse : hundreds of crazy gum flavors. 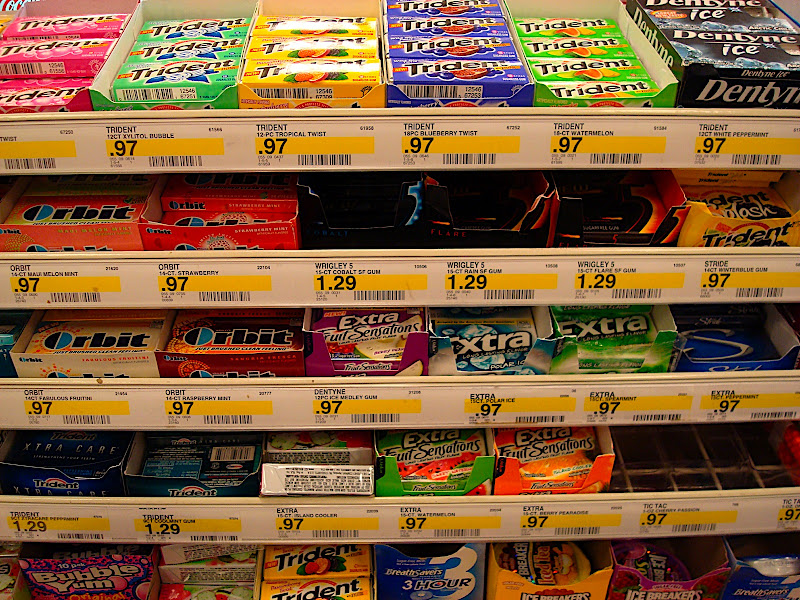 While in Mexico City, I joined an online dating site that is popular there, duly creating my profile and adding pictures and information. Since I was in Mexico, I obviously wrote the entire thing in Spanish. Upon returning to the US (since this site is also popular here), I changed the location information to place my profile in Los Angeles. I didn’t bother to change the profile text because I was pretty sure that people are all shallow and only look at the pictures anyway (at least at first). Of course I was wrong, people are very interested in the text of the ads. And many of them seem to think (despite the pictures) that I am in fact Latino. I get other Latinos writing to me in Spanish or white guys telling me how much they are “into” Latinos like me.

Little do they know that my enchilada is made of matzah.

And the guys that contact me are different than the ones that used to contact me here when my profile was in English. Interesting, I think I will leave it in Spanish for a while longer.

Wow. This is a pretty powerful political ad.

Whenever I come across a dollar bill that has some obscure note scrawled on it, I am always intrigued. The note could be something as simple as “Jack loves Jill” or “555-1212” or “Harry was here”, but I love the idea of these random messages being sent out on the winds of commerce. I am also fascinated to hear of the rare times when these messages have either made contact with someone who knows their sender, understands the message or even returns to the person who wrote it, years later.

In the same vein, I have unexpectedly come into contact with furniture from my past. A few days ago, Dallas introduced me to a friend of his named Paul who we met out for dinner. As we dropped Paul off at his apartment on our way home, I noticed that he lives in the same building where my friend Olaf and his friends owned an apartment a few years ago. I mentioned this to Paul and he was familiar with who they were though not much more. Last night we were invited over to dinner at Paul’s and there, sitting in his living room was Olaf’s old coffee table and sofa (on which I had crashed several times). At the time Olaf and friends sold their apartment they had also sold most of their furniture and these has been purchased by a friend of Paul’s and not too long after that by Paul himself.

It is a funny message from the past that alerts me to the interconnectedness of everything. I find it strangely comforting and compelling.

So there I am with my friend Dustin, driving to a bar in Silverlake, when who should pull up next to us but Drew Barrymore. (I swear to god that is her in the Prius) 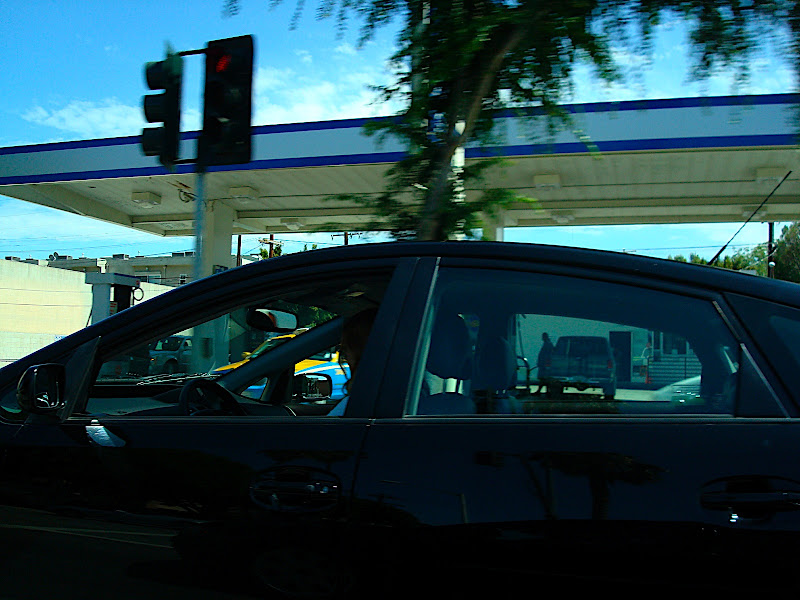 When I turned 40 about a year ago, A few friends from (very) far away places made an extraordinary effort and extraordinary trip to come (literally) half way around the world to come help me celebrate in Thailand. One of those very dear friends, Maureen, told me at the time that no matter where I was in the world, I was obligated to come to her 40th the following year. And so I came back from Mexico (not very far at all really) to attend her birthday bash last night in Glendale. It was a lovely party, with all of her friends (and a few of mine) in attendance, great food and great fun. Happy birthday, Mo! You deserve all the happiness and love there is to be had.