I had been thinking that it might be nice to throw an intimate goodbye party of some sort with a few of the friends I have made here. All this past week I was trying to decide the best way to accomplish it. Perhaps a party at my apartment? Meet out at a bar for drinks? A fancy group dinner? It took me until Friday, but I finally decided on the perfect combination of casual, fun and tasty. I would invite a group of friends to meet at my favorite taco place, El Califa for an informal goodbye. I sent out the email and awaited responses. It turned out that Daniel was in Brazil, so he couldn’t make it. Ditto for Javier, who had to leave to go to the US on Saturday morning. Gerardo and Roberto told me they already had plans and unfortunately couldn’t come. And I didn’t hear back from Bernardo, Raul, Israel or Mariano, so they obviously weren’t going. Well, at least Salvador and Rocco were coming. That was, until Rocco called Saturday afternoon to let me know that he wasn’t, in fact, coming. That left just Salvador and me and El Califa. Oh well, I thought, and as I prepared to leave my apartment it began to rain, heavily. It was really starting to feel like that SATC episode where Carrie turns 35 all alone. I arrived at the restaurant soaked and broke into a fit of laughter. 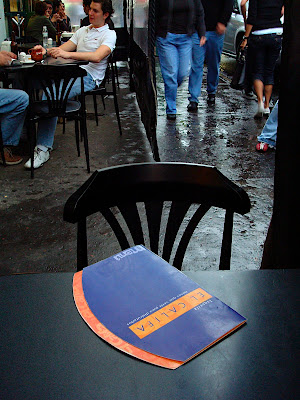