I don’t know if they didn’t get the memo, but a startlingly large number of people talking on cell phones in Mexico hold the phone in front of their mouth while talking. It is as if they didn’t know that the mouthpiece on these things was designed to pick up their voice WHILE the body of the phone is pressed to their ear. This allows for a quite handy full-duplex conversation, a wonderful feature of modern life. I never noticed this type of behavior in other countries I have visited, so what is up with Mexico or its cell phones?

I am really of two minds about my weekend in Guadalajara. I had a wonderful weekend, mainly because my host Chris was such a great guy and such fun to hang out with. We had a ball going out to various bars, restaurants and clubs, as well as wandering around the streets of Guadalajara. Chris is a fascinating guy with wide ranging interests, and we never lacked for subjects to explore.

As for the city of Guadalajara itself, I remain somewhat unimpressed. This is probably partially due to the universal adulation this city receives from everyone I talked to before coming here. It couldn’t help but be a little bit of a let down. But it is definitely more than that. The architecture, both colonial and new, fails to impress in any significant way. This is quite in contrast to so many other amazing cities in the country that I have seen. I will say that GDL is an easy city to walk around in, and the scale is rather pleasant. The food has been great, but I attribute that to Chris being a bit of a food snob like me, and really knowing the places where the best food is to be found. There are a few outlying areas of the city I didn’t get to that are supposed to be interesting, such as Zapopan and Mexico’s largest lake, Chapala. Perhaps I will see those some other day. For now, it is back to DF.

It has been a couple of late nights out partying at bars and clubs in GDL, and Chris and I were pretty much in recovery mode all through Sunday, taking it easy. We went out to dinner at a place called Fonda de la Noche, and I have to say it was one of the tastiest meals I have had in my entire stay in Mexico. And that is saying a lot, as I have eaten VERY well here. Absolutely everything was amazing, from the multi fruit aqua fresca to the suspiro appetizer (fried cheese) to the main plate of sopes and enchilladas. If you are ever in Guadalajara, this place is a must.

So I am in Guadalajara with my new friend Chris (who I nominally know through Gabe, but we realize we probably met before in SF at Troy’s 40th birthday party 2 years ago). Chris has been playing the gracious host, showing me around the city. One thing I can tell you right away: It is a lot hotter here than in DF. Today we walked around Chris’ neighborhood a bit and then to the city center, then took a cab to a sweet neighborhood called Tlaquepaque, which used to be a separate city but has been swallowed by the growth of Guadalajara. Chris is a great fan of seafood, and we have been having our fair share of excellent camarones. My first impressions of the city are that it is fairly tranquil compared to DF (duh) and that the architecture, on balance, is far less impressive than other places in Mexico, but again I am only just starting to get acquainted with the city. Chris is also showing me around the gay scene, with trips to a couple of interesting places last night and more lined up for this evening.

I should probably call this one “Pic of the night”, since it was taken late last night at the taco stand around the corner from Chris’ place in Guadalajara. Yum! 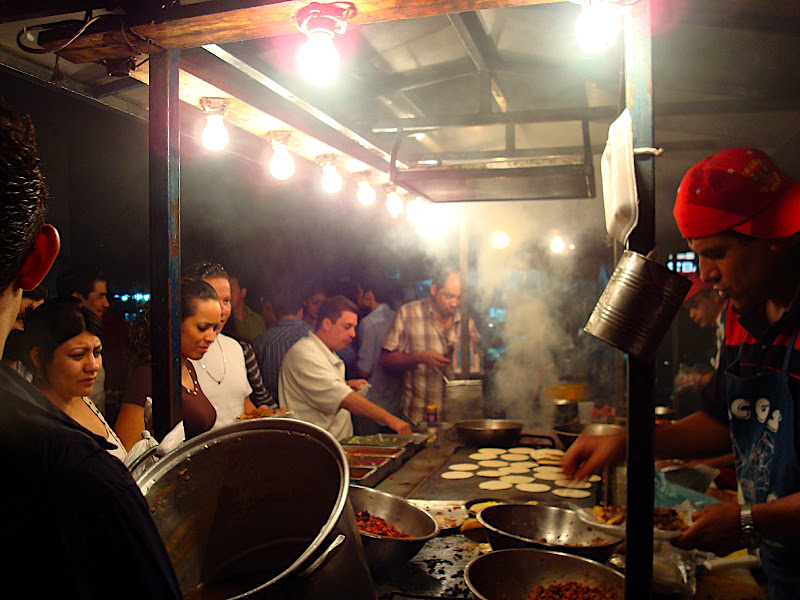 There are many words and place names that come from the pre-hispanic language of this area, Nahuatl. They are quite the tongue-twisting terms and I consider progress in pronouncing them tantamount to progressing in this culture. I am happy to report that I am now able to finally pronounce several of them, including the previously laborious “Popocatépetl“.

See you in Guadalajara…

Tomorrow morning I am off to Guadalajara, sometimes called the most Mexican city in Mexico. Everyone I have spoken to tells me I will absolutely love it. I hope they aren’t over hyping it. The trip is seven hours, so I decided to take a luxury bus for style and comfort.

I just came back from seeing the traveling art exhibit that everyone has been raving about. It is called Ashes and Snow, and it is currently on display in Mexico City’s main square, the Zocalo. This movable art tent was in LA just before I left about 2 years ago where it was likewise greeted as something incredible.

I thought it was total crap.

More of a marketing idea than anything else, the show is a testament to hype over substance. The images are simplistic (not to be confused with its much richer cousin, simple) playing into a mass culture (and watered down) idea of the exotic. These images in no way force anyone to contemplate the messy reality of truly far away places, they simply allude to a sanitized, romanticized version of it. The images are perfect for our culture of mass consumption, for they contain no content that would argue against modern excess. Quite to the contrary, the final part of the exhibit is a large vending area so that people may continue to consume these images with their purchase of posters, postcards, cds, books, etc. In fact, the entire exhibit could be considered the showroom, with purchase and checkout at the end.

Ultimately this exhibit was about as aesthetically and critically fulfilling as a “Hang in there baby!” kitty poster. The difference being that the kitty poster is less pretentious.

Um, I don’t think you can call it a discount if it is permanent… 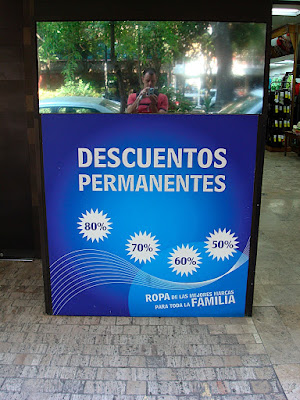 Fascinating article from New York Magazine about the several thousand year old scandal that goes by the name of “shoes”.

It took 4 million years of evolution to perfect the human foot. But we’re wrecking it with every step we take.

Although anyone who knows me knows I don’t care for feet (mine or anyone else’s), the article makes some really interesting points. Check it out here.