Today turned out to be pretty Jewy in Amsterdam. First we went to the Portuguese Synagogue, a beautiful old building and (according to what they told us) the oldest functioning synagogue in all of Europe, built in 1639. It has a pretty fascinating history, especially in that it was founded by Marranos more than 100 years after their families had been forcibly converted to Catholicism. After that we went to the Hollondesche Schouwburg Museum, which was an old theater that had been used as the central place for collecting and deporting the thousands upon thousands of Jews to the concentration camps. Not content with the heavy heart that one left us with, we went to take in the immensely detailed exhibits of the Resistance Museum, a fascinating but exhausting place. I suppose if it had not been rather cold and rainy today, we might have enjoyed a coffee on a lovely sun drenched terrace. Instead, we looked directly into dark and disturbing corners of humanity.

Due to the vagaries of price and scheduling, Josh and I have stopped back in AMS for a couple of days before our return to NYC. Amsterdam, though always lovely, greeted us with some 30 less degrees than we left in Marrakech, and a driving rain. But we were very much warmed by the wonderful welcome of Xavier and Huw, who we are staying with, and the fantastic Indonesian meal we enjoyed last night not far from their place. And after dinner, we met up with a very fun friend of theirs named Erin, and all went to sample some Dutch spirits at a pub across the street. I am no fan of gin, but the Dutch variety we tried last night (called Jenever) was delicious.

This morning Josh and I went to see a few things in the Medina I had not yet visited on my previous trips here. First we went to go see the Saadian Tombs, which were ok as far as they went, but one fact about them was just fascinating to me. They were sealed up for centuries, and only rediscovered in 1917 and subsequently restored. How does a large, above ground complex “disappear” and get “rediscovered”? Wouldn’t people have wondered what that building was behind there?

After that we went to the El Badi Palace, which must have been an impressive place in its day, and still is, even as a haunting ruin. Like seemingly everything else we have seen on this trip (Volubilis among others), much of its original marble and riches were plundered by Moulay Ismail for his own pleasure palaces. If you ask me, Moulay Ismail seems to have been a real asshole.

Following up our palace visit, we decided to take a walk in the nearby Mellah, which was the old Jewish ghetto here in the Medina. Many medina towns in Morocco have such ghettos, which were variously places to protect and imprison the Jewish population, depending on their usefulness to those in power at the time. Although at one time this area was quite prosperous, at the moment it is among the poorest and most run down in the Medina, and quite an eye opening experience. It was also interesting that the streets of the Mellah were all quite straight and parallel to each other compared to other parts of the Medina, and this made getting around quite easy.

Finally, we ended our excursion with a trip to the 19th century Bahia Palace, an incredibly beautiful and well crafted place with a level of detail that boggles the mind. We then had a quite delicious meal at the creatively named El Restaurant Bahia next door.

I have been working non stop for the past few days, but got quite a lot accomplished. With that out of the way, we will do a little sight-seeing tomorrow before heading back to Amsterdam and NYC. This evening I even had a little time before sunset so we took a walk from our hotel to the Jemaa el Fnaa, the main square of the medina, filled with chaos and light hearted energy. We then circled into the Medina itself for a bit to have a coffee perched atop one of the buildings, which was a great way to get a little bit of a view over the medina, and really beautiful at sunset. We finished up our little tour with a stop for some pastilla and merguez.

Now that I am in Marrakech, it is down to work. Yesterday was completely full for me with project concerns and planning, while Josh explored the city a little bit and enjoyed spa treatments at our hotel.  It was raining all day yesterday, so I didn’t really feel like I was missing out so much on the sight-seeing anyway. Speaking of our hotel (Hivernage), it is pretty high quality (although not the most beautiful design), especially the food. They have by far the best breakfast I have so far experienced in Morocco, and dinner at their restaurant is also top notch. Today will be another full workday for me, although I will probably take a lunch break with Josh to show him around the Jardin Majorelle.

Today was mostly a driving day for Josh and I on our way to Marrakech (where I have a few days of work). Since we had to drive through Casablanca anyway, we decided to stop and see one of the world’s largest mosques, the Hassan II, which was completed in 1993. It is apparently the only mosque in Morocco that is open to non-muslims, partially to make its operation self-funding. It is an extremely impressive edifice, and I have to admit to being quite awed by the scale and design and craftsmanship of it.

Last night, on a few internet recommendations, we decided to mix it up a bit and go for a meal at a restaurant/riad in the center of the Medina, so I called to make a reservation and ask them to come fetch us (which their facebook page said they would do). We were a little surprised when it turned out to be a French woman who came to get us and take us back to what turned out to be her riad. She was quite chatty all the way there and through dinner and we learned that she had been in Meknes for 6 years and was in the process of moving riads, so the menu was a little reduced. We were also the only ones there for some time, when a Spanish couple arrived in the middle of our meal, which made us feel a little better about our choice. We had pumpkin soup and various salads, which were ok, nothing special, and then for the main course a camel tajine that was surprisingly good. All during the meal she would come to the table and start monologues about living in Meknes, and how it was difficult for her, and that there were many forces arrayed against her. She spent a fair amount of time talking about the corruption, and the difficulty of finding good help. She told us that her current helper was number 79 (and she referred to many of the others by their number and deficiencies). She also spent a fair amount of time telling us about being attacked by boys with stones in a southern town that is supposedly part of the cocaine drug trade, and how many people are terrified of walking alone in this country, but not her. By the end of the meal, we were in a hurry to get out of there and away from her, she seemed a bit unhinged. One of the best parts of eating out at her place was the winding path of the medina we were led through on the way there and on the way back, in the dark of night.

This morning Josh and I set out by car from Meknes to see a couple of sites about 30 minutes north of the city. I should stop here and tell you that I think (so far) renting a car was a really great thing to do, not at all because of the rental experience itself (kind of a pain) but because we really have been able to set our own pace and see some of the very beautiful countryside. This is especially true at the moment I imagine, as the rainy winter months make all the hills especially green and lush.

The first site we went to was the excavated colonial roman town of Volubilis. The place was shockingly intact, and it really gives one a full impression of a roman era city. There are many types of public and private building, clear street grid, some great mosaics, and beautiful views of the surrounding countryside. In addition, there are several great vantage points around the site that give you a spectacular view and clear sense of the whole. It is a shame that a lot of the stone was apparently looted over the years by rulers in nearby towns for their own building, one wonders what it would have been like had these remained. I strongly recommend a visit, it is really a fascinating place.

After that, we stopped over for a bit on the nearby (10 min by car) town of Moulay Idriss, which is a lovely hill town with maze like streets running all over. While it was quite picturesque and worth exploring the streets, the most beautiful sites in the town are not open to non muslims and so alas we could not enter. It is worth stopping in the town if one if visiting nearby Volubilis, but I would not make a special trip to see it alone.

It was pretty easy to get parked and find our riad (Felloussia) once we arrived in Meknes, despite it being inside the winding streets of the medina. We then went out and gave Josh his first taste of a real medina (the one in Rabat, as I said, was pretty easy to navigate). As is normal for someone’s first time in the winding maze of such a place, I think he got a little uncomfortable at one point when it wasn’t clear how we would ever find our way out. As I have mentioned previously though, even though it is less than perfect, the combo of google maps and GPS makes navigating way easier than in past eras. We then came back to a truly excellent dinner tajine prepared by our riad. I had the beef and prune one and Josh had chicken and citrus. Both were some of the best I have ever had. 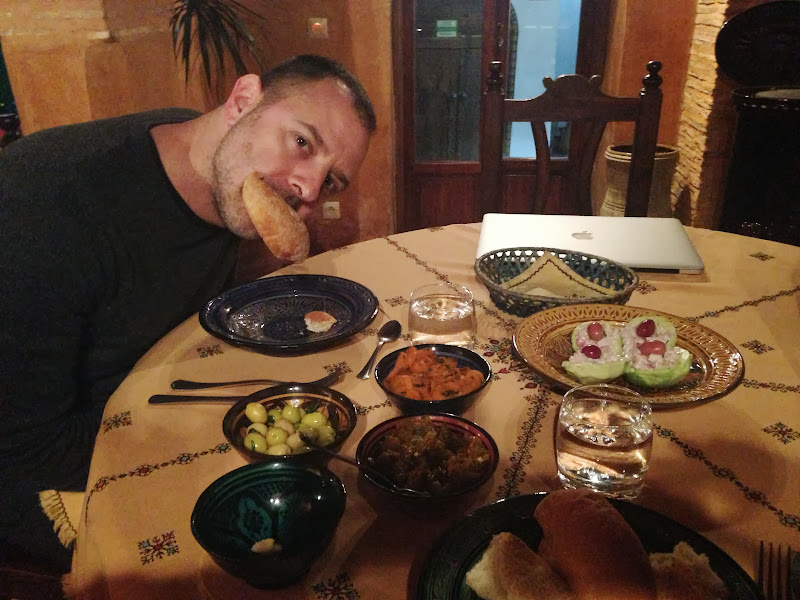 This morning Josh and I took a few hours to walk around Rabat, primarily through the medina and the kasbah. The medina of Rabat is a quite simple affair, very easy to navigate in compared to Marrakech or Fes, but it was a nice intro for Josh to the souk chaos. After making our way through we found a lovely cemetery on a hill overlooking the ocean, and then meandered over to the kasbah where we were assaulted by several touts and schemes. After wandering around the kasbah for a little bit, we went in to see the palace and some guy forced a hurried and awful tour on us, and then tried to shake us down for a huge sum (which we refused). Other than that though, it was all super cool and totally worth a visit.