I have recently been trying out Facebook’s new Graph Search and perusing the various websites and articles talking about the privacy  and abuse concerns.  After playing around with it by searching various things (“my conservative friends” – 0 hits, “my republican friends” – 1 hit, “my liberal friends” – 91 hits, “my friends that like ice cream” – 9 hits) I started wondering what my ratio of gay to straight friends was. I have long felt that we all naturally gravitate towards people more like us or away from those not like ourselves (see “my republican friends” search above for an exclusionary example), but I always hope to have a greater balance of different influences in my life that I actually have, so it is interesting to try to take stock in various ways.

What is interesting is that if I add up my female and male friends (as identifiable in Facebook search) I get a total of  265, far short of the  593 friends I have on Facebook  What this means is that the rest of the people have either declined to state their sex, are intersexed (a subsequent check shows that Facebook does not even allow setting this), or set their privacy controls to prevent searching this information.

1. Although “interested in” nominally means for romantic/sexual purposes, it can also be construed to mean friendship and general interest. So perhaps the guys putting this in were using these other meanings.

2. It could be that with the continued existence of homophobia in several parts of the world (and self loathing around the exclusively gay label), some of these people felt it was a little more safe to claim to be interested romantically in women, though they are not.

3. Some of these people are truly self-identified as bisexual (whether they act on it or not).

On the flip side, it was interesting to note that of the 14 men I have always identified as straight, I was surprised that three of them listed “interested in males and females” (for reasons 1 or 3 above, or in the inverse of 2, to seem more hip and cool than they actually are).

Obviously, even within the subset of my friends who can be identified by gender, many decline to state their interest in either sex. Although a number of them may truly be asexual, the majority probably see this as something private they need not share. Or I suppose they could be married or otherwise coupled and not looking for any romantic attachment, thus declining to state for that reason.

I have some ambivalence about Facebook’s new search, even as I think it is technologically cool. Time will tell if these tools open us up to still more misuse and abuse of our information, and what “privacy” means in an increasingly interconnected world.

The past two days have included some lovely walking and driving around the area, a visit to Bard college campus, some time spent with my friend Eric and his very cool friends and their families. I am really struck by how crafty they all are, with gardens and pickling and maple tree tapping and syrup making. Click on the link below to see the photos. 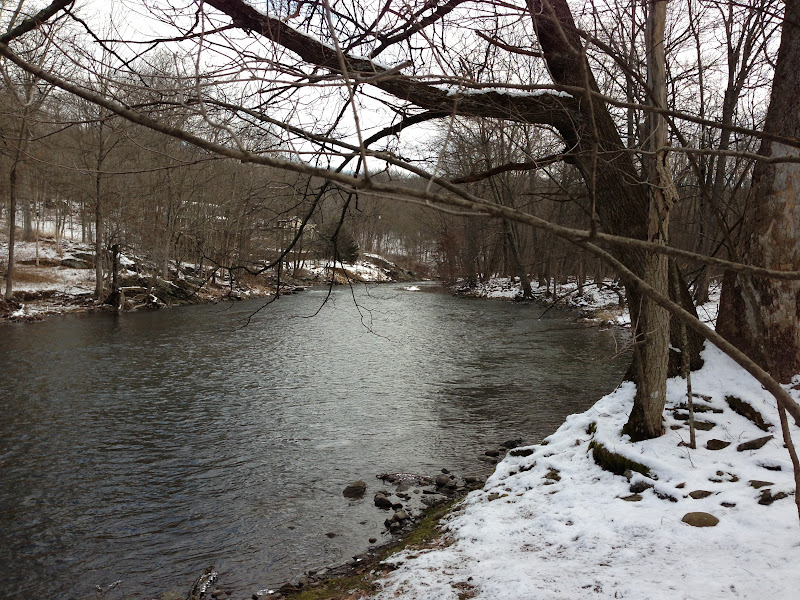 This weekend I am with a friend at his small house up in the Hudson valley. Outside of my trip up to Woodstock a couple of years ago, this is my only trip upstate. (Note to self: you really need to do this more, there is a whole world close-by outside the city.) My friend’s house is in a fairly secluded area, with woods all around and no bullshit an actual babbling brook nearby. On the property is part of an abandoned railway track and trestle, also kind of cool. Looking out from his house I kind of assumed the woods had always been here but then he pointed out to me that there is a lot of history in this place, it was cleared a couple of hundred years ago or more and was pasture and farming land. This growth is much newer, and it was fascinating to walk around the property and see clues to the past land use over time, and how nature (or some modified form of it) reclaims and reshapes a place, different than before. 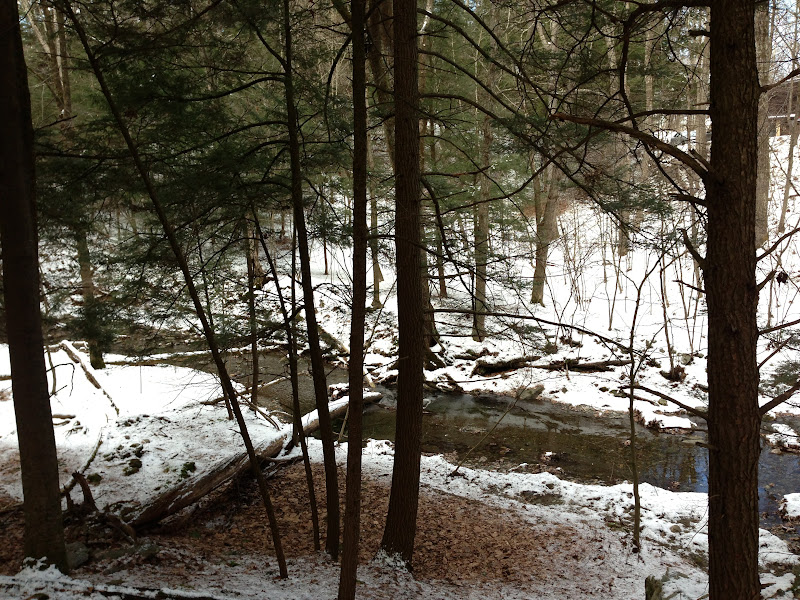 I had a doozy of a weird dream last night. In the first part of it, I found out that Barack Obama was my biological father, and I was somehow much younger, not quite a kid, but maybe still in college, and I was in some official building where his office was located and being told by the receptionist to wait for a bit, he wanted to speak to me. I kept waiting and waiting but he never seemed to come out of that meeting. Finally I got bored and left and suddenly I was with my friend Olaf and we were somewhere near the north pole, but it really wasn’t the north pole, just some cold remote area we had never seen and could not seem to locate on a map. We were on some kind of cruise ship making our way south, back home or something, but kept getting lost and stumbling upon some very strange cultures. We were never quite sure if we were being welcomed or menaced by the inhabitants of these places, their ways of communicating were totally obtuse. We were in places that looked like hugely monumental Buddhist temples and communities, then on glacier type islands with small wooden buildings, then in extremely dense unrecognizable cities that had walls like canyons as we made our way through unknown streets. All the while we were trying to find where we were on our phones’ map programs, but they were not working at all for us, because we did not recognize the phone type or software and how it worked. Somewhere around the fifth or six lost world, I woke up.

My parents are in town for a visit, and we always have fun and manage to do something nice while they are here. This time, I scored us a very-difficult-to-get reservation at Per Se, where we went for lunch today. This easily ranks as the most expensive lunch I have ever had, but we viewed it as a rare and worthwhile experience. I have to say, the menu and extras were extraordinary. We went for the more modest 5 course meal (as opposed to the  9 course one also on offer), and I left feeling quite satisfied. More than satisfied actually, I should have stopped trying the various confections they brought out for us AFTER dessert, ranging from the macarons to various housemade chocolates and truffles and ice cream. I asked the waiter for an insulin shot at the end, but alas they were fresh out. I think the highlight of the meal for me (other than the copious desserts) was without a doubt the Côte D’agneau with merguez and lime scented yogurt.  They apparently change the menu every day, and the mind boggles at the variety of dishes and creativity that must be on offer here over a long period. This is not the kind of place I would go every week (or every month or even year), but it definitely left an impression and I could certainly see going back sometime for a special occasion (if I am in the mood to skip paying rent that month, for example).

Yesterday Jonathan took me on a little tour of the area surrounding Dartmouth. We headed into neighboring Vermont to a charming little town called Woodstock, and then on to a place called Quechee for lunch and a look around the glass blowing facility called Simon Pierce. Click on the album link below to see a few photos of those places and Dartmouth itself.

From Woodstock and Quechee (and Dartmouth)

My friend Jonathan has been showing me around Hanover and Dartmouth College, which I am enjoying as a kind of other worldly break from the hustle-bustle that is NYC. I will stay here until tomorrow, then take the bus back across three states (Vermont, Massachusetts  and Connecticut) to get home.

Dartmouth is a very peaceful and lovely place that also kinda reeks of upper class privilege. There is a nice mix of buildings from various eras, my favorites being the oldest ones, as they have an interesting boxy scale to them I haven’t seen much elsewhere. In the basement of one of the buildings on campus my friend Jonathan showed me one of Dartmouth’s greatest art treasures: A mural by the Mexican social realist Orozco. I am really not much a fan (aesthetically) of this type of art, but the subject matter was pretty fascinating nonetheless. And the subversive nature of the mural in the face of all this wealth and power (Dartmouth has only about 6000 students and endowment of about 3.5 billion dollars) tickled me, I have to admit.

My wonderful friend Jonathan (who, between his sojourns in Italy and busy work schedule I don’t get to see nearly as often as I would like) has accepted a teaching position at Dartmouth for the next few months. Never having been to New Hampshire, and always loving a road trip, I readily agreed to help him with his move to take up residence there (Hanover). We head out in a couple of hours, and I will spend the weekend in the frigid temperatures, hanging out with my friend and helping him get settled in. Since this is obviously barren wilderness, I assume we will be chopping our own wood and skinning and eating whatever small animals we find in the forest. I doubt they will have internet or running water or indoor toilets, but I remain hopeful. (My point being: don’t expect blog updates, treat them as the luxury item they are should they arrive.)

Should I survive, I will return via opulent, Wifi equipped bus on Monday evening.

I had a dermatologist appointment this morning down in TriBeCa. Given the time of day (this is rush hour) the subway was somewhat full of people on their way to work. And when I got off and walked to the dr’s office, I was confronted by a wall of dark coats, pants and skirts, making their way in plodding unison towards their various work stations. It was not unlike a scene from that old great silent film, Metropolis, and it was more than the winter season being upon us that gave me a chill. There are of course positives and negatives to any career choice, but seeing this army of similarly dressed, grey faced people, marching in zombie like steps towards the office, I felt very grateful indeed for the flexibility my work environment affords me.

Last night Josh and Michael arranged a table for a group of us at The Metropolitan Room, an old-style cabaret where we watched the incredible Marilyn Maye perform. I had never seen her before, she was amazing. At 84, she was a ball of energy and a sight to behold. And with every song she sang or belted out, every choice she made, she was sending the same life-affirming message. One couldn’t help but feel uplifted and giggly when leaving the place. After that, we headed over to Josh’s to countdown to midnight and ring in the new year.  All in all a fantastic NYE, and one that puts me in a hopeful frame of mind for 2013.